5 Toyota Tacoma "TRD 6x6" Is The Widebody Truck Nobody Asked For
Car video reviews:
Up Next

We've all had that one co-worker who thinks his Camry TRD is so fast it should be called a sports car. Drag racing him in an actual sports car is a bad idea because he'd just make excuses. But what if there was an unassuming yet extremely fast Toyota RAV4 to take him down?
3 photos

The Camry TRD is actually nice and it appeals to your inner child, much like a Civic Type R (obviously not on the same scale). TRD possesses the soul of a sedan that looks like a rental. It gives the Camry devilish wings, spoilers, and bright red skin.

Under the hood, we find the trusty 3.5-liter V6 Toyota engine making 301 horsepower. This also puts out 267 pound-feet of torque, and in a previous The Fast Lane drag race, we found out how that's not enough when you're racing a turbocharged Mazda6, but the RAV4 doesn't have any turbos.

So you've heard of the Prius Prime, the plug-in version of the hybrid sedan that giant screen. Well, this is the RAV4 Prime, and it's got more under the hood. With a 2.5-liter and a bunch of electric motors, this crossover is somehow able to produce 302 horsepower.

The good thing about the RAV4's system is that electric power is usually a lot better in a drag race. The advantage is heightened by the fact the race is shot at high elevation, where the air is thinner.

But enough of this jibber-jabber; it's time for drag racing. As we predicted, the all-paw traction and electric motors rocket the RAV4 Prime into the lead. Right about now, Toyota must be regretting not making plug-in cars sooner.

It's worth pointing out that the RAV4 doesn't have the fun handling or the curb appeal of the TRD. Starting at about $40,000, it's also noticeably more expensive, but that's normal for a battery-equipped car. 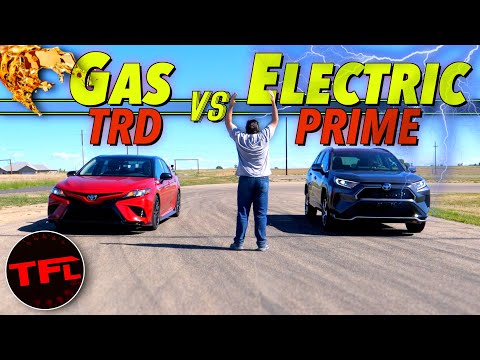