5 Toyota Announces More Production Cuts in June and July for Japan
Car video reviews:
Up Next

Toyota entered the world of motorized sports in 1957 by fielding a Crown in the Round Australia Trial, also known as the Mobilgas Rally. The Japanese automaker got a taste of success in the World Rally Championship at the 1975 1000 Lakes Rally with the Corolla. Fast forward to the 1980s, and Toyota’s ambitions grew much larger.

Toyota 222D: The MR2-Styled Rally Car That Wasn't Meant To Be

WRC, as you’re well aware, was getting plenty of attention thanks to the Group B machines. The growling, snarling, and fire-spitting Audi Quattro at Rallye de Portugal comes to mind, the car being driven at triple-digit speeds to the cheers of a ridiculously large crowd of spectators on the road.

Group B was, excuse my French, balls-to-the-wall rallying at its finest. High-ranking officials in Japan’s Toyota City and Germany’s Cologne, where Toyota Team Europe was based at the time, wanted a piece of that action. The Celica was competing in the lower classes, but alas, the Japanese outfit simply couldn’t make a case for a Group B-spec car at that moment.

Toyota saw an opportunity to compete at the highest level possible in 1985 with the announcement of Group S, a class that required only ten homologation vehicles rather than 200 for Group B. Unfortunately for everyone, Group B was canned in May 1986 after Henri Toivonen and co-driver Sergio Cresto died in the Tour de Corse. One day later, FISA president Jean-Marie Balestre made the shocking announcement that Group S is going out the window as well. Indeed, the same Jean-Marie Balestre who invalidated Ayrton Senna’s hard-fought victory at the 1989 Japanese GP in Suzuka for cutting through a chicane after a crash with teammate Alain Prost.

Toyota’s promising Group B challenger was far into development in May 1986 (the first prototype of the 222D was ready in February 1985). Can you imagine the faces of the peeps at Toyota Team Europe when they heard the news? It’s pretty certain they didn’t take the cancelation lightly. Nevertheless, do remember that Group S was almost a duplicate of Group B. The biggest differences came in the guise of homologation numbers and power limitations. Safety wasn’t a priority, and no amendments that would’ve improved safety were proposed prior to the unfortunate axing.

The 222D is extremely different from the MR2, chosen as the most suitable candidate for Group S rallying from Toyota’s lineup because of its mid-engine design. Certain sources have suggested that the chassis is loosely based on the AW11, the internal codename of the MR2 with the 1.6-liter engine (itself codenamed 4A-GE). Others were more careful with their words, suggesting that the only shared tidbits are the overall silhouette and automaker’s logos. Most probably, the truth is somewhere in the middle.

What’s known for certain? For starters, the stillborn rally car features a central monocoque with a tubular subframe out back for the powerplant and transmission. Cross-drilled and ventilated brake discs are present on every corner, and brake balance can be adjusted from the cockpit on the go. Double wishbones up front, a five-link rear, anti-roll bars, and wider-than-stock tires wrapped in five-lug wheels are used, along with rear- and four-wheel-drive variations. You heard that right! RWD would be perfect on tarmac, while the Xtrac-supplied 4WD would be necessary for gravel.

The strangeness doesn’t end here because Toyota ran two four-pot engines. The 4T-GTE, a Celica TCT-sourced lump, was joined by the 503E that was eventually used in Group C and IMSA Grand Touring Prototypes racing. A modified version of the 503E was employed in the Supra GT500 for the Japanese Super GT series because the 2JZ was deemed too front-heavy.

Gifted with a cast-iron block and twin-plug head constructed from aluminum alloy, the 4T-GTE features a displacement of 2,090 cubic centimeters. In combination with a KKK turbocharger, electronic fuel injection from Nippondenso, and an air-to-air intercooler, it produces between 360 and 600 ps (355 to 592 hp) depending on boost pressure.

The more serious 503E, built by Toyota Racing Development in California, was still in development at the time. From a displacement of 2,140 cubic centimeters, it could be pushed to 800 horsepower or thereabouts. Pretty insane numbers for that era, but do remember that Toyota’s thirst for success was intense as well. Dressed in lightweight composites, the 222D is rocking massive wheel-arch extensions and quirky little intakes on the front lid.

The doors are said to be interchangeable with the MR2. As opposed to its road-going sibling, the 222D makes do without pop-up headlights in favor of Plexiglas-covered fixed headlights. A lot of vents and a giant ducktail spoiler dominate the rear end. On the inside, the party piece is the exposed linkage of the manual transmission. As for weight, can you believe this fellow tips the scales at 750 kilograms (1,653 pounds)? In combination with the 503E turbocharged engine, scary may be the word you’re looking for.

Ove Andersson and Bjorn Waldegaard fine-tuned the 222D in the winter of 1985 to 1986. Although Toyota Team Europe had high hopes for their Group S rally car, the short wheelbase and sheer amount of peak torque made it a handful. Understeer, oversteer, and whole seconds of turbo lag at full tilt didn’t help the 222D project either, yet Toyota was willing to iron out these problems had Group S gone forward for the 1987 WRC season.

All 11 cars were registered in Japan. The automaker had to pay taxes for any car built from R&D money, hence the scrapping of most 222Ds. Although we don’t know who had the foresight to save them for posterity, three units still exist. A white-painted example is displayed at the Toyota Mega Web showroom in Tokyo, a black car resides at Toyota Motorsport GmbH in Cologne, and another black example was purchased by a collector. 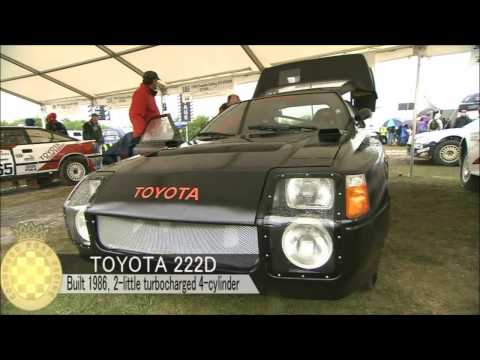