2 Holden Ute Goes Up in Flames During Insane Burnout

3 Come On Burnout Light My Tire

4 Spanish Supercar Does a Burnout in Monaco

The Oklahoma EF5 tornado left a big mess behind, taking the lives of at least 27 seven people and demolishing households faster than a bulldozer. In the process, the widespread event wrecked several automobiles as well.
1 photo
Among those vehicles was a fifth-generation Chevrolet Corvette Z06 that had to be scrapped, although its engine was still working. Now, we've found another four-wheeled survivor, this time built by Detroit rivals Ford.

The Mustang you’re about to see below has been through a lot worse than the Vette. Having lost its entire body, it no longer looks like a Mustang, but we’re going to trust the YouTube user that posted the video, saying the car was “wrapped around a tree” during the terrible tornado that struck the US last month.

But despite its awful state, the disemboweled pony still has a working engine, and the owner even managed to take it out for a spin and do a burn out as well. Truth be told, you don’t need a metal body to burn some tires... One thing’s sure, this Mustang needs a “Ford - Built Tough” logo on its bo... erm... engine block. 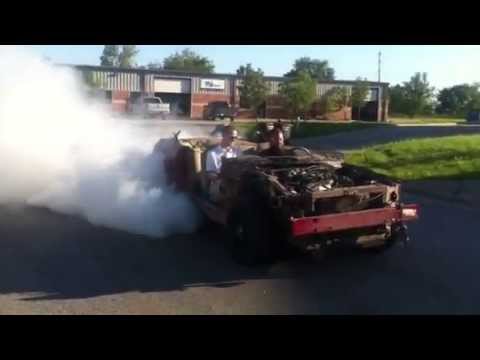