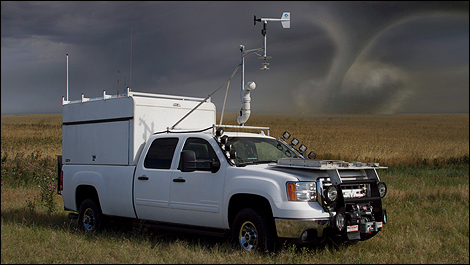 If you are one of those tornado-chasers the entire world keeps watching on Discovery Channel, then you know one of the most important tools for your trade if the vehicle in which you chase the storm. Most of the existing vehicles used in such a manner have been converted by their owners to cope with the demands of being caught in a tornado. This means, of course, some are better, some worse.

Ohio-based A.R.E. however has a new idea. It created the A.R.E. TWISTEX Probe, a truck which they say is capable of carrying its users safely through virtually any storm. Using a 2008 GMC Sierra 3500 as a basis, A.R.E. fitted a Deluxe Commercial Unit (DCU) Series truck cap on it and gave it the fancy TWISTEX Probe name.

The truck uses side toolboxes for storing smaller tornado probes, as well as Strattec lock cylinders in folding t-handles and Suspa gas props on all doors. The truck can accommodate a 680 kilograms Tommy Gate Lift Gate.

The Probe is currently used by Tim Samaras, the same guy you've seen on Discovery's “Storm Chasers.” In fact, the Probe has been created at his request.

“I started scientific storm chasing about 10 years ago when I developed the next generation of tornado probes that our team deploys into the path of oncoming tornados,” Samaras said according to Auto123.

“Because these instruments weigh close to 200 kilograms each and measure about 1 meter high when stored, a traditional truck cap wouldn’t work. We needed a durable shell that could keep this equipment safe, so we enlisted the help of A.R.E. who manufactured a 112-centimeter tall truck cap specifically for our needs.”

Of course, A.R.E. probably doesn't do this for everybody. It's main area of expertise is the manufacturing of berglass truck caps and hard tonneau covers. We chose to tell you about the TWISTEX Probe because next week, autoevolution will run a cover story on these amazing storm-chasing vehicles.