1 The Stig License Plates Worth More than a Car
Car video reviews:
Up Next 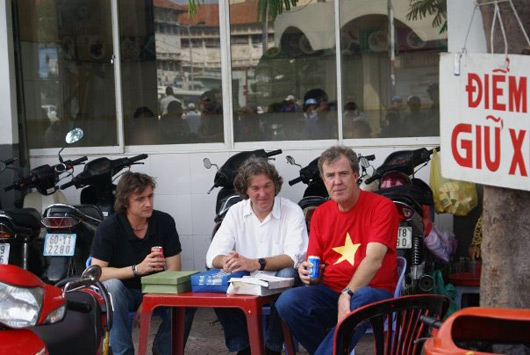 Do you know that expression “when hell freezes over”? It's usually used for situations that you know are never gonna happen, kinda like a cold day in hell. That is exactly the expression that comes to our mind when looking at the pictures of the Top Gear cast in Vietnam looking as inconspicuous as a flea at a dog show.

The pictures are taken from Facebook from an album which is no longer accessible, but we've got the scoop to let you know what's going on with the world's favorite auto show. So here's the deal: Jeremy Clarkson & co. are filming right now for their 12th series of Top Gear, which has taken them to exotic Vietnam.

This location was chosen for a series of in-country challenges, along with United States, Botswana and Japan. The United States were all about the Bonneville salt flats, where the guy pushed a Corvetter ZR1, a Dodge Challenger SRT8 and a Cadillac CTS-V to their limits.

The Vietnam trip is apparently going to be all about a motorcycle trip (that sounds like fun, don't it?) all the way from Ho Chi Minh City to Hanoi, which is basically a south to north cross-country dash. There is also a planned stop to the World Heritage site at Halong Bay, or at least that's what the gossip says.

In the pictures you can see a very wet Clarkson standing in the middle of a tropical storm, the guys having lunch, the crew gathered by a jet plane (what's that about?) and of course a shot of the bikes in the background.

The UK version of the show is due out in November, which means the crew is putting the final touches on what promises to be a very entertaining piece of television broadcast, and not just from a  automotive point of view.