1 Chris Harris Reviews the Honda e, Says It's Fun to Drive but Too Expensive

2 James Bond Iconic Cars Get Raced on Top Gear: A Must-See for 007 Fans

3 The Stig Drifts Insanely Fast Caterham 620R in the Wet, Delivers Like a Pro

5 YouTube Trio Is on Reverse Top Gear Challenge With Set of Depreciated Supercars
Car video reviews:
Up Next

Rough Lamborghini LM002 Takes On the Alps in Style, Thrilling Drifts in Sight

Although the 2022 GR 86 is Toyota’s latest release from the global Gazoo Racing family, it's still confined to the company headquarters ahead of the sales release. That's why about everyone is currently playing with the other two members of the gang. And the Top Gear team also brought the feisty Honda Civic Type R along for good measure.
11 photos

Has anyone noticed how automotive vloggers have become so incredibly self-infatuated with their popularity (ok, at least some of them, not all) that nowadays we’re embedding the time stamps in our materials just to help everyone get to the action parts a bit more quickly?

Well, here’s the flip side of the coin where a completely established automotive entertainment outlet, a.k.a. Top Gear’s YouTube channel, effectively doesn’t waste any time at all in delivering the drag race promised in the title of the video (embedded below).

Basically, there’s only a truly short presentation of the competitors in the beginning; literally, it lasts for just ten seconds! Then our host for this Japanese drag race on British soil (oh, the globalization) goes on for another 16 seconds (seriously, we counted them) with his predictions for the eventual outcome of the match and what happens during the actual run.

As for the participants, we’re dealing here with the coolest Toyotas available right now, the GR Yaris and A90/Mk V GR Supra, which are pitted against the feisty Honda Civic Type R. The underlying idea was to basically check out what happens when AWD meets RWD and FWD.

Although the predictions called for the Honda Civic to catch up somewhere during the race, that actually doesn’t happen. By the time they arrive at the finish line (which is set at an unknown distance, presumably it’s the traditional quarter-mile), it falls back quite a bit, and the GR siblings end up battling for supremacy.

Now, because there’s just one minute of footage for the entire video, there really isn’t any fun in spoiling the outcome. 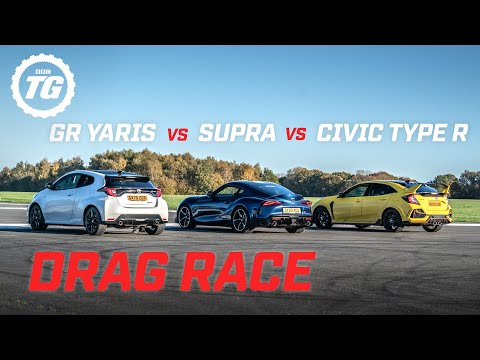