Elena Gorgan
For any passionate skateboarder, few other gifts would top something with legend Tony Hawk’s stamp on it. But this would have definitely done it: a custom deck with Hawk’s DNA in it. In the most literal sense.
6 photos

Some hours ago, Tony Hawk and Liquid Death, a company that’s most likely going for the unofficial title of the world’s most irreverent and punk water company, announced a new, limited-edition series of decks they had worked together on. Designed by Will Carsola and printed by hand at Prime Skateboards, the new deck included graphics combining the Liquid Death logo, “the thirst executioner,” and Birdman’s birdman skull. It also included drops of Birdman’s blood.

You can see the announcement in full in the video below. Hawk is an early investor in Liquid Death and, in the ad, he says he’s one of the 200,000+ to have joined the club by signing away his soul to the company for all eternity and beyond. That’s not a joke: if you join the club and sign away your soul, you get access to some cool merchandise and maybe even a free T-shirt or two with your water purchase.

Hawk also gave Liquid Death his blood: a vial of it was drawn and mixed with the red paint that was then applied to the decks.

The idea might sound too gory for some, but it’s certainly in keeping with the image of the water company that boasts of being able to “murder your thirst,” and whose stated “evil mission is to make people laugh,” get them to drink more water, and fight plastic pollution along the way. It’s also in keeping with Hawk’s activism, and this is where the apparently random association between the two makes sense: 10% of the sales go to charity.

Non-profits 5 Gyres and The Skatepark Project are the direct beneficiaries of those funds: the former tackles plastic pollution, while the latter is Hawk’s foundation that builds skate parks in under-served communities. Each custom deck was priced at $500, which is a lot, no sense beating about the bush.

Even so, they sold out in 20 minutes after they became available. “I have literally put my blood (and soul?) into these decks,” Hawk said ahead of the launch. It clearly helped, and now, 500 skateboarders will get to enjoy Hawk DNA-infused decks. 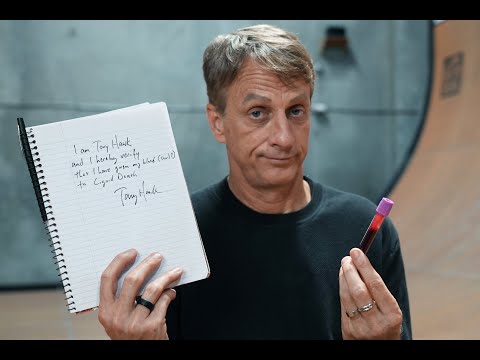