Hollywood star Tom Hanks could probably buy just about any car in the world, but he made some questionable choices nevertheless. Among the more bizarre Hanks’ rides were two Fiat city cars, which the actor held dearly for whatever reason. He later sold the first, a Fiat 126p, for charity and is preparing to do the same with the other, a 1975 Fiat 128.
19 photos

The Italians are well known for designing great cars. Still, it was another story altogether when it came to building them. Fiat cars pioneered many modern features that we take for granted today but were notoriously unreliable. The Fiat 128 was a prime example of that, being one of the first vehicles with a transverse front engine/front wheel drive layout. For all the good things that can be said about it, the 128 was riddled with problems. The aggressive rust was the least of them.

Despite this, the Fiat 128 that Tom Hanks sells for charity looks impressively good on the outside. As some people say on Bring a Trailer, nobody has seen such a good-looking Fiat for years. The car was sold new by Briola Motors in San Francisco and later put in storage until the second owner bought it in 2011. The car was acquired by actor Tom Hanks in 2017 and used in the 2017 movie The Post. It was later repainted in the green shade that we see today as part of a halted refurbishment.

We don’t know whether the previous owner or Tom Hanks himself screwed it because the car looked much better in 2011 when it was first auctioned on Bring a Trailer. Especially the seats are an eye sore, being torn and needing re-upholstering. The seller offers a quotation, and it seems the work is around $1,500-$1,800. Besides that, the Fiat is in pretty good shape and almost fully functional, except for some minor details that need addressing.

Apparently, Tom Hanks wanted to do an engine swap on this Italian beauty. He later gave up entirely, and the engine compartment was returned to its original state. There are still some problems to be fixed, like the hand throttle control that is not connected and the alternator that doesn’t charge the battery. The good news is that the engine starts and runs without issues, as you can see in the video below.

The car was listed in the “Projects” category on Bring a Trailer because it still needs work and a thorough mechanical inspection before it can be deemed roadworthy. The crowd on the auction site already pities the next owner, recounting their own bad experiences with a Fiat. Probably that’s why Tom Hanks wants to get rid of it. The good thing is that he wants to do something good with the money, so the proceeds go to charity. There’s no reserve on this Fiat, but taken from the 126p that Hanks sold a while back, expect a wild valuation. 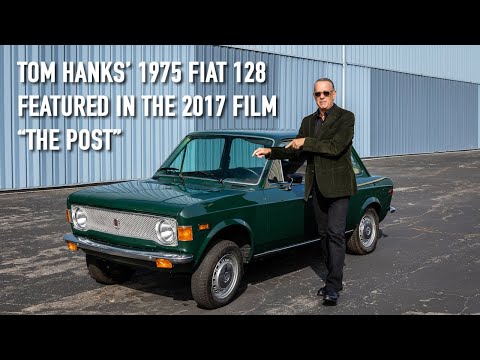