4 BASE-Jumping on Bikes and Plane Stunts Are Fun But Expensive, Tom Cruise Has Learned

5 Now That's a Mission That Seems Impossible: Tom Cruise Might Get to Film in Space
Car video reviews:
Coverstory

Tom Cruise might be an unpleasant person in reality, and he might be the de facto leader of a religious cult, as well as a rather short man who’s a big fan of lifts and shoeless leading ladies. But Tom Cruise is also a badass and a consummate professional, and both qualities are on display here.
20 photos

On May 27, Top Gun: Maverick opens wide in theaters, and leading man and producer Tom Cruise is determined to get as many butts in the seats as possible. It’s been years since he decided against doing promo work like every other actor out there, sticking instead to the Cruise recipe: focus on his acting and his stunt work, both in print and TV appearances.

So when the time came for Cruise to do James Corden’s The Late Late Night Show, he did just that. Four years ago, during the promo trail for Mission: Impossible, Cruise got Corden to jump out of an airplane, so this appearance had to top that. This time, he flew the TV host out to the desert and invited him not on one, but on two separate rides on military jets that he piloted himself.

Fans know that Cruise is a licensed pilot and that he flies anything from planes to helicopters, but Corden still joked about how he was an actor and not a real pilot, and it was still mildly funny. The whole bit, available in the video at the bottom of the page, was a mix of predictable jokes (Corden is not adventurous, and he likes the safety and stability of solid ground, Corden doesn’t want to die, Cruise is a badass, the bromance is real) and solid one-liners.

But what ultimately saves the skit is the fact that Cruise is, at the end of the day, a badass.

Cruise picked Corden up in a HondaJet, which yes, he owns and pilots. The second ride was on that same day, in a 1944 fighter, also out of Cruise’s personal collection – a single-engined North American P-51K Mustang, the ex-Kiss Me Kate. Cruise even got into a bit of dogfighting, much to Corden’s feigned despair.

After some light training and pep-talk, and marshmallows by the fire, the next morning, Cruise piloted the Aero L-39 Albatros owned by Method Seven – Patriots Jet Team. The high-performance jet trainer would have air conditioning, he promised Corden, who had now been promoted to the status of “my Goose.” Looping and awesome aerial stunts followed, again much to Corden’s faked chagrin.

In the studio, after the clip played, Corden admitted to his audience that he had called Cruise 24 hours before the stunt to tell him that he’d changed his mind. Cruise convinced him to stick to it with the promise that he (Cruise) wouldn’t do anything to put him (Corden) in danger. It worked.

If you like what you see, do give Top Gun: Maverick a go for more awesome aerial stunts from Cruise. Check out the video even if you don’t plan on seeing the movie, for the aerial stunts and an insight into the life of one of Hollywood’s most secretive stars. 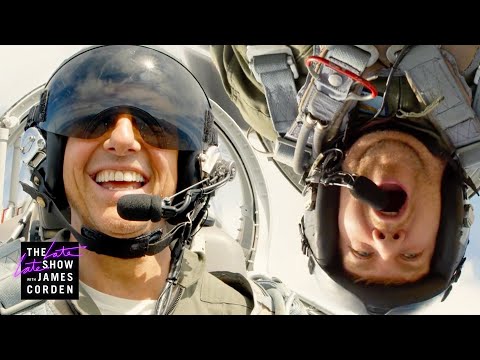