5 2020 Toyota RAV4 Is Less Comfortable Than Mazda CX-5, Says Consumer Reports
Up Next

Home > News > Car Profile
Mircea Panait
Born during a time when body-on-frame utility vehicles were the norm, the RAV4 ushered in car-like crossovers in 1994 for the 1995 model year, although the unibody construction was previously proven by Jeep and Lada. Industry-leading reliability, economical powertrains, and affordability are three other elements that made the RAV4 a pretty common sight in the United States.
14 photos

So common, the RAV4 has outsold every car and UV in this part of the world last year. Exactly 430,387 units were sold in 2020, and for reference, Ram moved 563,676 pickups in the same timeframe. The Ford F-Series, however, remains the most popular nameplate with 787,422 units.

The Fast Lane believes that nothing comes close to the RAV4 in its class, and it’s not hard to understand what Roman and Tommy Mica are on about. You want front-wheel drive and a few creature comforts for daily driving? That would be $26,150 excluding destination, thank you! Customers who live in the colder parts of the nation can opt for all-wheel drive, and yes, fuel-sipping hybrid and plug-in hybrid options are also available.

Some may consider the RAV4 a bit vanilla in terms of exterior design, and I couldn’t agree more with them. Looking at the bigger picture, exterior design that lacks excitement doesn’t necessarily mean that we're dealing with a bad car. Even the base trim has got you covered in every department, and the cabin isn’t too shabby either, thanks to nice plastic and lots of standard kit.

LE is how Toyota calls the most Spartan configuration, which is rated at 27 and 35 miles to the gallon (8.7 and 6.7 liters per 100 kilometers) in the city and on the highway. Android Auto, Apple CarPlay, Amazon Alexa, LED daytime running lights, LED headlights with automatic high beams, the Toyota Safety Sense 2.0 safety suite, and 17-inch steelies with plastic covers also need to be mentioned, along with 203 horsepower from a 2.5-liter engine.

“Overall, in the segment as a whole, it’s hard to beat the RAV4,” said Tommy. 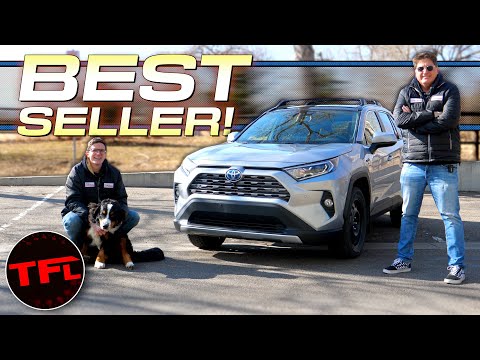