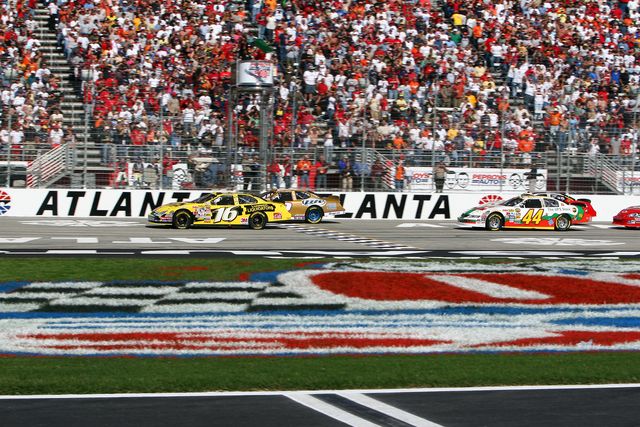 Jimmy Watts' adventurous habits during the Kobalt Tools 500 last Sunday did not go unpunished by the NASCAR officials. As announced by series' official website, the crew member for the No 47 Toyota driven by Marcos Ambrose was suspended for the upcoming 4 races as a result of his chasing-down-the-tire actions during the aforementioned race.

As reported by several media publications following the Kobalt Tools 500 – and quite visible during the actual race – the Atlanta Motor Speedway officials decided to take out the caution flag after Watts was spotted chasing a tire that “escaped” from his team's pit box all the way to the grass section of the in-track.

The incident took place during lap 67 of the race and caused quite a chaos within the Sprint pack. As the organizers decided to caution the race due to safety reasons, some of the drivers pitting at the time re-entered the track with an extra lap down. While time-outing the race, the NASCAR officials also decided to suspend Watts for the remainder of the race.

Three days later, an official statement from NASCAR revealed Watts had violated Sections 12-1 (actions detrimental to stock car racing) and 9-15-U (crew members must not go on the race track for any reason while the cars are racing or while the cars are running under the yellow flag or the red flag, unless otherwise directed to do so by a NASCAR official).

As a result of that, he'll be banned from the pit wall until April 22nd, while also placed under NASCAR probation until the end of the year (December 31st). He did not go down alone, however, as crew chief Frank Kerr was also put under probation until the same term due to violation of Sections 12-1 and 9-4-A (crew chief assumes responsibility for the actions of the team), as reported by the aforementioned source.

For a short glimpse of what actually happened during Sunday's Kobalt Tools 500, click here.