1 Massive Moon Rocket Is Out and About for the First Time, Heading for the Launch Pad

3 Perseverance Took 11 Million Human Names to Mars, NASA Plans to Fly Some Around the Moon

5 Here Are the Space Launch System Solid Rocket Boosters in a Few Hard to Grasp Numbers
Car video reviews:
Up Next

At the end of last week, the Space Launch System rocket and the Orion capsule it carries up top officially started their journey to the Moon. Like all other pieces of such technology before them, the first leg of this journey involves a very slow crawl from a building to the launch pad, here on Earth.
12 photos

On March 17, NASA took the SLS combo out of the Vehicle Assembly Building (VAB) at the Kennedy Space Center and, using the mammoth crawler-transporter 2, moved it at a maddening speed of just 0.82 mph (1.32 kph) over a four-mile distance, to Launch Complex 39B.

At such slow speeds, it took the crawler hours to reach its destination and, impressive as the SLS might be, watching it inch forward for hours on end is a pretty boring thing. This is why Lockheed Martin decided to compress the full length of the trip into a 2-minute time-lapse video, which it released this week (check below the text).

The clip shows, from several angles, every instance of the “historic moment for the future of human spaceflight,” from the opening of the massive VAB doors to the emergence of the imposing SLS, and its arrival on the launch pad late into the night.

The rocket is now waiting for NASA engineers to be ready with something called wet dress rehearsal test. It will require the tanks to be filled with propellant, and an almost complete countdown to be conducted. The space agency says that during the test 700,000 gallons (close to 3.2 million liters) of fuel will be pumped into the tanks, and the countdown should stop at minus 10 seconds.

The outcome of the test is pivotal to NASA deciding on the actual launch date of the mission. Called Artemis I, it’s a dry run to the Moon and back, with no crew on board, for purposes of checking if all systems work as advertised. 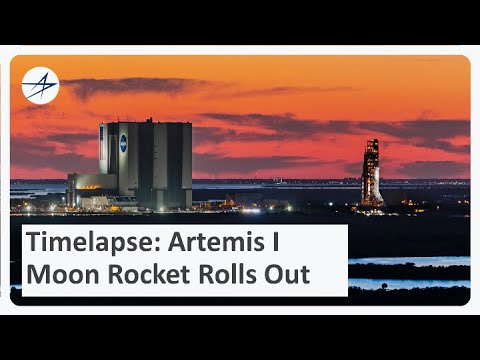