Cupra Born Gets the RAEBURN Treatment, Wrap Is Crazy!

Designed to offer the riding feel of a regular bicycle but with the added stability of a tricycle, the BiTrike is a versatile wheeler that can tackle any terrain and can serve as a reliable cargo vehicle.
7 photos

Do you guys remember Arcimoto’s highly acclaimed MLM (Mean Lean Machine)? It is a tilting electric trike with no chain or belt and powered by three hub motors and a pedal generator. When using auxiliary batteries, the MLM is supposed to offer more than 200 miles (321 km) of range per charge.

The BiTrike may not be so futuristic looking and it uses your traditional bike chain, but this three-wheeler can also tilt. Unlike Arcimoto’s Mean Lean Machine, this trike has just one wheel in the front and two tilting ones in the rear, with independent suspension. Kostas Simelidis, the Greek creator of the BiTrike, explained that he went with this design because placing the two tilting wheels in the front caused “stiffness in turning”. Not just that, but when reaching the pavement with just one of the two wheels first, the handlebar would unpredictably twist to one side and make the rider feel unsafe on the trike.

A built-in drive differential in the rear axle provides better traction to both rear wheels and the BiTrike packs only premium components. It features a Fox AWL e-SUV front fork and a Marzocchi Bomber CR rear shock absorber. The Greek-made BiTrike is equipped with a Shimano Altus 7 gear system and Shimano disk brakes. It features a stainless steel tube frame and weighs a total of 37 kg (81.5 lb) with the optional e-bike kit and wooden carrier included.

Simelidis also offers an optional mid-drive electric kit with its BiTrike, consisting of a 48V/13Ah lithium battery and a 500W motor. The range and top speed of the bike-like trike are not mentioned.

If you fancy the BiTrike wheeler, you can now find it on Kickstarter and get it for as low as $2,683, without the electric kit and the wooden carrier. The estimated delivery date is August 2023, but unfortunately, the trike is just available for shipping in the European Union for now. 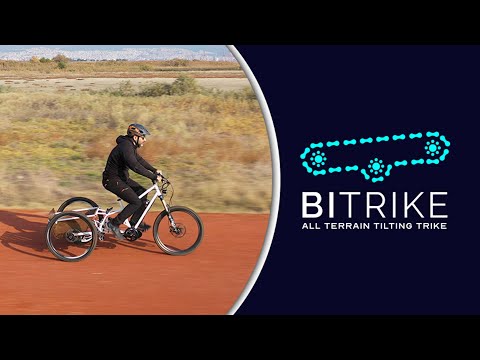