1 Grab the Popcorn, Here Are the Most Outrageous Celebrity DUIs

5 Fantastic Waze Features You Want to Know About

Mircea Panait
Father, golfer, and entrepreneur in this exact order according to his description on Facebook, Tiger Woods has rolled over his Genesis GV80 in California on Tuesday morning. The 45-year-old was the only person in the vehicle, and first responders have rescued him with the “jaws of life.”
8 photos

Invented by George Hurst in the 1960s, this contraption was first used in motorsport to save racers. Before the Hurst Rescue Tool, first responders used crowbars, Halligan bars, as well as circular saws.

The golf player’s agent confirmed to TMZ Sports that Tiger Woods “sustained multiple injuries and is currently in surgery.” A source within the L.A. County Sheriff's Department told the tabloid newspaper, “they do not believe alcohol was involved.” Speaking on the condition of anonymity, the source “did not say whether any other substance was possibly involved.”

As a brief refresher, the most successful golfer of all time was arrested on suspicion of driving under the influence of drugs or alcohol in 2017 in Florida. Discovered passed out in his Mercedes-Benz S-Class with prescription drugs and marijuana in his system, Woods pleaded guilty to reckless driving. He also agreed to enter a diversion program to escape the charge.

At the hearing, the pro golfer received a year of probation, was ordered to undergo 50 hours of community service, take regular drug tests, and got a $250 fine. He wasn’t allowed to drink alcohol during probation, or else he would’ve been sentenced to 90 days of jail topped by a $500 fine. His arrest is considered by many a turning point for Eldrick Tont Woods, but the one they call Tiger proved the naysayers wrong by winning the Masters in 2019.

Woods had attended the PGA Tour’s Genesis Invitational over the weekend, hence the GV80 sport utility vehicle he was driving. “I just hope he’s all right,” said Justin Thomas, a fellow champion and friend of the professional golfer, at the WGC-Workday Championship press conference this morning. 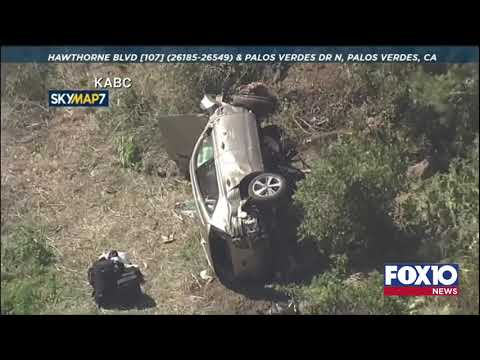 This morning @LMTLASD responded to a roll-over collision in which @TigerWoods was injured. Please see our statement... pic.twitter.com/cSWOxKZC1w