2 $10K Boos Is the First eMTB From Boutique Brand Unno, Is Designed to Defy the Conventional

3 C3STROM Astro Is an E-Bike With a Motorcycle Spirit, Gorgeous and High-Performance

If you’re unfamiliar with Richmond E-Bike, you might be pleased to find out it’s a Canadian shop that makes a wide range of micromobility vehicles, from electric bikes to trikes and scooters. Its Thunder bikes come in a variety of sizes and designs, for various types of applications. One of them is the Thunder X-Treme Custom E-Bike, a tough, powerful eMTB with a design to match.
7 photos

Richmond E-Bike’s Thunder electric bikes are all designed in Canada and there’s a wide selection to choose from. From the most budget-friendly small folding bike priced at $954 to a 26” folding mountain e-bike and a fat tire, moped-style Thunder, there’s an option for every taste and need. The Canadian shop even announced a fat tire cruiser but for now it’s just a “coming soon” model.

But the Thunder X-Treme e-bike is a different kind of beast, a high-power, all-terrain electric mountain bike that promises long-distance rides and is equipped for the roughest trails. The bike is available in different battery and tire sizes and it also comes in a Special Edition, although only a few specs are revealed on the official website.

The Thunder Extreme Custom e-bike packs a 72V/28Ah lithium battery that claims to offer a range of up to 196 km (121 miles) on a single charge, at a speed of 32 kph (approximately 20 mph). However, there’s also the option to get the 48 Ah battery instead, which boosts that range to a whopping 320 km (approx. 200 miles) per charge, when riding the bike at the aforementioned speed. Fully charging the battery takes approximately 7.5 hours.

Powered by this battery is a 5000W motor and even though Richmond E-Bike doesn’t mention anything about the top speed of the Thunder E-Xtreme, a customer says in a review that the e-bike can easily hit 75 kph (46.6 mph).

Other notable features of this rugged eMTB are the 26 x 2.3” tires, the hydraulic brakes, full downhill DNM Racing Shox suspensions, the thumb throttle, and LCD display.

You can order the Thunder X-Treme Custom E-bike on the manufacturer’s website, with the two-wheeler starting at $5,576. 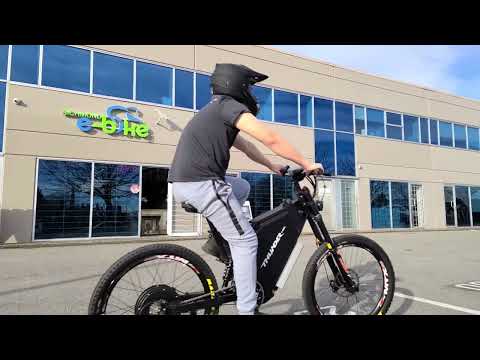