Offered between 1968 and 1970, the Road Runner's first generation was designed to appeal to a very specific demographic. As opposed to segment rivals like the Ford Torino, Plymouth used a cartoon character to sell a back-to-basics muscle car to youngsters with a need for speed.
44 photos

Until the leaded gasoline phase-out and 1973 oil crisis, the Road Runner had many takers because of its tip-top value. The hardtop coupe, for example, used to retail at $2,945 or $21,625 adjusted for inflation in today’s money. Included in that price, the 383 big-block V8 engine and Hurst-shifted four-speed manual transmission were a seriously desirable combo.

The Motor Trend Car of the Year in 1969, the Road Runner soldiers on as a testament to the good ol’ days when safety standards were lax, and cruising was the pastime of choice for teenagers. The 1969 model offered by Volo Cars is a numbers-matching survivor worthy of your attention, a three-owner bird with just 30,917 miles (49,767 kilometers) on the clock.

Chassis number RM21H9G290012 didn’t even feature a carpet when it arrived brand-spanking new on the dealership lot. Traded three years later, the second owner held on to it until 2003, when the current owner bought and restored the car. Straight from every angle, this nippy bird impresses on the underside as well because there's no rust to speak of. None at all!

Completely rebuilt, the 383 motor rocks stainless valves to cope with the ethanol-blended unleaded gasoline of today. When it was new, the 6.3-liter V8 with a four-barrel Carter carburetor used to crank out 335 horsepower and a hearty 425 pound-feet (576 Nm) of torque at 3,400 rpm.

And now, care to guess how much the vendor asks for this four-wheeled piece of Mopar nostalgia? $61,998 or $645 per month, which is about the same price point as the Dodge Challenger SRT Hellcat for the 2021 model year. But as opposed to modern-day muscle, you can be assured that a Road Runner will go up in value for many decades to come. 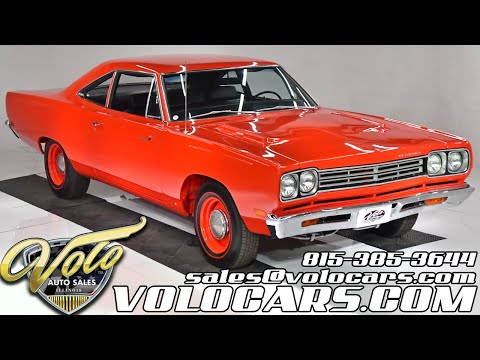