5 Cardi B Is the First to Fly on the New Playboy Private Jet, Big Bunny
Car video reviews:
Coverstory

A mind-blowing private jet that didn’t cost a thing, an outrageous Father Day’s gift, and an elusive private jet company are some of the spiciest topics when it comes to celebrity luxury toys.

It’s almost a common sight these days to spot all types of celebrities on board their private jets, but these particular ones became infamous due to their controversial stories.Drake’s $200 Million Boeing 767
It was only a few years ago when Drake’s fans got to admire the glorious Air Drake for the first time. The artist unveiled the decal on social media for everyone to see. It was a giant Boeing 767, customized for Drake. And the customization was supervised by non-other than Virgil Abloh, the creative director for Louis Vuitton’s men’s line.

As expected, Air Drake became instantly famous but also drew some criticism. The reason was that Champagne Papi didn’t actually purchase the private jet but got it as a gift from Cargo Jet, a Canadian Airline. As TMZ reported at the time, the company believed that the $200-million gift would pay for itself in publicity, as Drake was constantly making international trips and even inviting sports superstars to join him for parties up in the air.

Four years later, this turned out to be exact, especially as the global health crisis pushed people towards private means of transportation even more. Air Drake turned out the be the perfect “social distancing” tool for the millionaire artist. And one of the most recognizable private jets, due to its baby blue custom paint job and OVO owl logo – two of Drake’s style landmarks.

Although the aircraft was already more than two decades old, when it was gifted to him, the Boeing 767’s customization alone added up to $100 million, which skyrocketed its current value to somewhere between $185 million and $200 million. And that’s huge, considering that the rapper’s fortune is estimated at $150 million.

Apart from the dazzling Luis Vuitton plush gold finishes and decadent mirrors, the interior reveals 30 leather seats (and that was to create a spacious layout because this huge bird could fit 200 seats), a bedroom (with a king-size bed, of course), two living rooms, and a business lounge. Large TV screens and top-level entertainment systems turn the Air Drake into a perfect party jet.

You could say that Champagne Papi is a millionaire with a billionaire’s private jet. But he is also known for his involvement in charitable projects, so the world shouldn’t blame him for getting a stunning private jet for free. It’s part of Drake’s blessings.Beyonce and Jay-Z’s $40 Million Bombardier Challenger
Unlike the Air Drake, which is the ultimate baller private jet, this is a luxury family jet. And it’s infamous because it was one of the most opulent Father Day’s gifts ever heard of. Not to mention that it was gifted to Jay-Z by Beyonce, and everything they own becomes instantly iconic. While outrageous for most of us, this multimillion-dollar gift fits in perfectly with all the luxury cars and watches that the two have flaunted over the years.

The famous duo prefers to charter when it comes to their vacation superyachts, but it seems that a private jet was considered a necessity, due to how often they travel, either for business or pleasure, taking their children with them as well. Although it’s been a decade since the superstar revealed the monogrammed private jet for her husband, it continues to be one of the most famous private aircraft owned by celebrities.

The Bombardier Challenger 850 Learjet, with Jay-Z’s real name inscribed on it, is the ultra-luxurious version of a family vehicle that can fly. It can seat from 15 to 19 people and sleep up to seven, so it’s perfect for the entire family, plus nannies or assistants. Although the two haven’t revealed too much of the jet’s interior, we know that it unveils a clean, minimalistic look with natural tones and premium materials.

In addition to the spacious main bedroom and guest sleeping areas, their jet also comes with a fully-equipped kitchen and two bathrooms. Queen B and Jay-Z are known for their expensive taste, so champagne and gourmet meals required a dedicated kitchen, enough storage room, and the finest dining arrangements.

Not just luxurious but also performant, the Bombardier Challenger 850 can fly them almost anywhere, thanks to the 2,800-nautical mile (3,200 miles/5,000 km) range and a top speed of 647 mph (1,041 kph). We don’t know if the Carters are planning to upgrade their flying mansion any time soon, but this one will always be remembered as an iconic Father's Day gift.Soulja Boy’s Imaginary $55 Million Gulfstream V and Airline
Nobody can deny Soulja Boy’s talent and well-deserved success, but he’ll also going to go down in history as the rapper who lied about owning a private jet not just once but twice. The first time was maybe understandable since he had just turned 21, and his amazing success made everyone believe that he had actually treated himself to a $55 million Gulfstream V, known as the 5G.

The media went wild at the time, reporting about the young rapper’s opulent toy that boasted 12 Italian leather seats, a luxury bathroom, liquor bars, and a custom paint job. Almost half of the price was due to this extensive customization. But the illusion was shattered pretty fast after the artist’s spokesman clarified that it was just “an elaborate rumor.”

But, a decade later, Soulja did it again. And this was no rumor since he filmed himself boarding on a private jet and introducing his very own private jet company to the world. Yes, just last summer, Soulja was proudly announcing that he was the first rapper to own not just an aircraft but an entire private jet company named SB Airline, of course.

You might say that it was just a joke, but the 31-year-old artist twitted the same statement while showing off his alleged luxury airplane, and he did sound very convincing in the video. Unfortunately for him, fans didn’t forget the $55 million private jet stunt, so they were quick to dismiss his claim, no matter how awesome it sounded.

At least for the time being, Soulja Boy will have to stick to his luxury car collection, to which he recently added a striking orange McLaren GT, a gift from the famous producer Ray J. 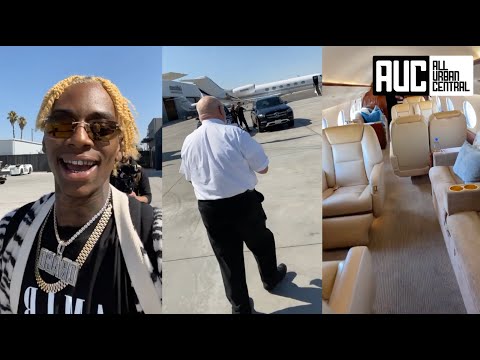