1 NASA Ingenuity Encounters Anomaly on Its Sixth Flight on Mars

5 This Portable Cooler Gets You Ready for the Apocalypse
Car video reviews:
Up Next

What is one of the things astronauts really miss when they’re out in space? A more exquisite dining experience. Scientists have developed a space fridge design that might put an end to beef jerky and canned foods in astronauts’ diets. It would also keep food supplies edible for a considerably longer time.
1 photo
We, humans, have come a long way technology-wise. We were able to put a man on the moon and send astronauts on space missions since 1961. But we are yet to find a solution to the seemingly ordinary and simple problem of refrigerating foods in space.

Astronauts might finally taste something other than canned and dehydrated foods in their future space trips. A team of engineers from Indiana’s Purdue University, in collaboration with Air Squared and Whirlpool Corp., have come up with a fridge design that might actually work in space.

With a conventional fridge, your food is kept cool using vapor compression, which is not a reliable technology in space, where the lack of gravity can’t keep liquids and vapors secure.

The fridge prototype was designed to work in zero gravity. It is small in size (like a microwave) and is equipped with an oil-free compressor. That means that even though the appliance would use the same vapor-compression cycle to cool food, no oil would be used in the process, to avoid the risk of liquid flooding.

Based on multiple tests run on zero-gravity airplane flights, scientists concluded that the fridge can be used in any conditions and position, even upside down. It works in full Earth gravity as well. NASA also pitched in with its Flight Opportunities program, to help the team run its flight experiments.

With the newly designed space fridge, the food supplies of astronauts might last up to six years. The appliance could be a valuable item in microgravity environments such as the International Space Station.

Engineers are still analyzing data and should be able to give us a more detailed report in the coming weeks. 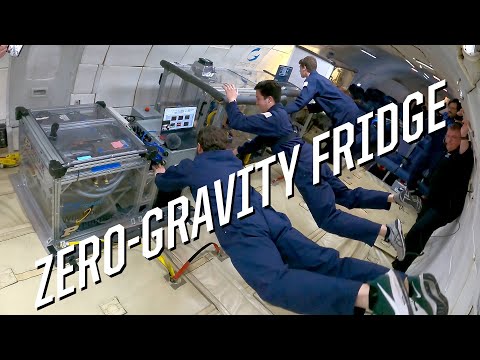