2 1978 Volkswagen Type 2 Westfalia Camper Is Perfect as a Project, Hides Some Surprises

5 This Good-Looking High-Roof Volkswagen Type 2 Camper Might Be Cheap but There's a Catch
Car video reviews:
Up Next

We’ve seen many Volkswagen Vanagon camper vans with a Subaru engine at the back, but this Type 2 from the second generation is quite unusual. For a DIY job, it looks impressive and sports some good utilities to work as an off-grid camper.
16 photos

The 1971 Volkswagen Type 2 was modified by the previous owner, a local Volkswagen collector and builder. Work included the Subaru engine swap, as well as the interior amenities. The engine was sourced from a 2002 Subaru Outback and offers plenty of oomph. It’s mated to the original Volkswagen transmission, which was rebuilt with longer and stronger gearing for the torque and power of the Subaru engine. The latter was completely disassembled, resealed, and received new heads, head gaskets, and timing chain.

We imagine flexing its Subaru muscles would baffle many people, considering that the Type 2 was seriously underpowered. A true sleeper this is, and a beautiful one. The two-tone body was fitted with a high-roof camper top and top-hinged windows. Solar panels are installed on top, although the seller mentions they are not hooked up yet. The buyer would need to wire the camper and install solar batteries to make it an off-grid camper.

The cabin shows some wear and tear, but the interior is simple and functional, indicating that a skilled and thoughtful person took care of everything. Inside you’ll find the mandatory fold-out bench, which could probably sleep two people. There are nice cabinets and a stainless steel sink that works with an electric pump. A replacement refrigerator that is basically new and a folding table complete the landscape, just the bare minimum to have a worry-free adventure.

The vintage Bus is offered on Bring a Trailer with a host of other camping paraphernalia, including a matching tent, a freshwater hose with a built-in filter, and a ’70s vintage portable toilet, among other things. Four people have made offers for the Bus, with the highest bid at $7,777. Four days are left until the auction closes, so we expect the price to increase significantly in the coming days. 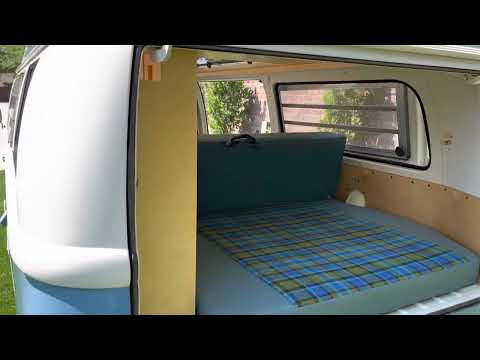