Home > News > Custom Cars
Alexandru Boghiu
During his senior year in high school, Kyle wanted a muscle car, so he and his grandpa went looking for one. After buying this hard-to-find Chevelle, Kyle (who was then 18 years old) used the $1000 his grandpa gave him to put disc brakes on the car the first weekend after driving it home.
18 photos

His mother and neighbors hated the car, but his father liked it. So at least he had some support, and in the following months, he worked on it whenever he got the chance.

Since he didn’t have any money back then, he did what he could at first, adding little tweaks here and there over the 2 decades he’s had the car.

Back in 2004, Kyle took a machine shop class just so he could learn to work on the engine himself. He applied what he learned to the current engine block, a 383, which he got out of an ’81 RV. It was “probably hot tanked 20 times,” according to the owner.

The current transmission is a 4l80 (which Shawn from AutotopiaLA says he’s a big fan of). Before that, though, the car had a 4l60 that kept blowing up because it couldn’t handle the power.

Besides working on the engine, the owner also mixed the paint color and replaced the door panels himself. Speaking of which, most of the stuff inside the car is all black, including the aforementioned door panels, the SCAT procar seats, and the old-school dash.

As for the stereo speakers, they’re gone and have been replaced with a boombox, but who needs an audio system when the car itself sounds so good? You can check it out yourself by watching the video below. 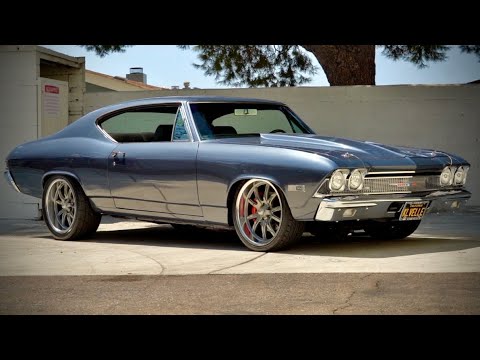