1 Mercedes-Benz Issues Two Separate Recalls in the Same Day, Both Add Up to Less than 900 Cars

Have You Ever Seen a Boeing 747 Land on a Grass Strip? You Kind of Will Now

Willingly or not, Mercedes-Benz has built up a lot of hype around the new W213 E-Class model, whose official online release we are still waiting to get, ahead of the full debut in Detroit next month.
1 photo
But as we’re waiting, Mercedes-Benz keeps releasing snippets of information about the car, pumping up the anticipation even further. The most important official reveal so far was that of the car’s interior, while our spy photographers did their best and managed to capture the car with almost no camouflage on. So the only thing we still need right now is a set of hi-res photographs with the car in a beautiful setting, and we’ve got everything we could hope for. Except actually driving the new E-Class, of course.

To make our wait more bearable, Mercedes-Benz has uploaded a video detailing the development process for this 10th generation of the E-Class, focusing on numbers to relay the scale of what coming up with a new model means for a car company.

It took everybody at Mercedes-Benz 48 months to take the new E-Class from an idea to a finished product. Four years isn’t necessarily a long time - it’s actually quite quick, especially for such an important model - but you can be very sure they were extremely intense for everybody involved.

Protecting the cars from prying eyes were 3,500 square meters (37,675 sqft) of that dreaded camouflage film that keeps us from getting a more clear impression on the car’s design early on.

Since the E-Class is a global model, the car had to undergo extreme weather condition tests that saw it drive in severe cold (-32 degrees C or -25.6 degrees F) and scorching heat (60 degrees C or 140 F).

The new Mercedes-Benz E-Class has a lot of other impressive and interesting numbers to brag about, but we’ll leave you to discover them in the following video clip. Which, frustratingly enough, only shows the car heavily camouflaged. 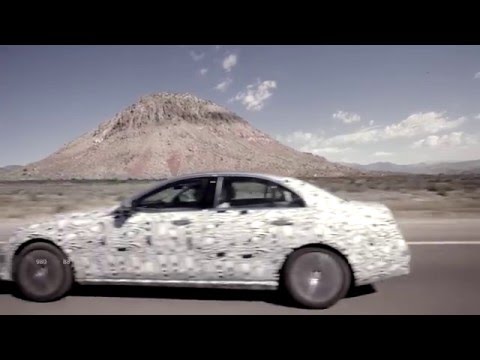