BMW’s M Division may not be interested in launching a mega hatch to rival the likes of the Mercedes-AMG A 45 S, or an M7 flagship sedan, but an ultra-powerful crossover is on their ‘to do’ list. Actually, its development is far more advanced, as it is expected to premiere in the coming months.
12 photos

Previewed by last year’s Concept XM, the 2023 BMW XM will be the brand’s first standalone M car since the iconic M1, so it has a lot of weight on its shoulders. As you can see for yourselves, it won’t win any beauty contests, as it is far from being an attractive proposal in the super crossover segment.

It has a front end similar to that of the facelifted X7, with a split-light signature and big kidney grilles. The hood has a muscular shape, and so do the side skirts, and rear fenders. The sloping roofline ends with a small spoiler, and it has thin taillights, and stacked exhaust pipes, just like the show car.

A clear indication that we are indeed looking at an electrified prototype is the yellow sticker applied to the rear windscreen. Speaking of it, it will pack a twin-turbo 4.4-liter V8 engine, backed up by an electric motor and a small battery pack. The combined output and torque should be rated at 750 hp and 738 lb-ft (1,000 Nm), which will make it the most powerful BMW M model ever. With the battery fully charged, it might be able to travel for a maximum of 50 miles (80 km).

As we already mentioned in the intro, the 2023 BMW XM is understood to be a few months away from being shown to the world. It will come to life at the company’s Spartanburg facility, in South Carolina, and from there, it will be shipped to global markets. 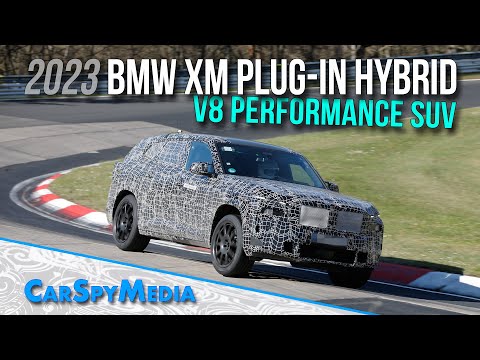