3 This Could Be The World's Fastest G 55 AMG

Alex Oagana
Some people aren't yet aware of the fact that the Mercedes-Benz SLS AMG had always had a life cycle of just three years, while the fact that it is still available in 2014 as the Final Edition is pretty much like a warranty extension which wasn't originally supposed to happen.
1 photo
Despite the AMG GT (C190) set to be unveiled later this year, it will not be a direct replacement for the SLS AMG (C197), as the modern Gullwing will stand on its own as a separate flagship sportscar, which might receive a successor in quite a few more years from now.

In Black Series clothing, the SLS AMG is the fastest ever production Mercedes-Benz on the famed Nurburgring Nordschleife, with a large part of its extraordinary track performance belonging to the legendary M159 engine under that freakishly-long hood.

With 631 hp and 635 Nm (468 lb ft) of torque extracted from a 6.2-liter V8, the M159 in the SLS AMG Black Series is the world's most powerful production eight cylinder that is naturally-aspirated.

In case in wasn't obvious, the SLS 750 conversion kit transforms a “regular” SLS AMG into a 750 hp and 900 Nm (664 lb ft) of torque beast, so you can take a wild guess about how much hp would a three-liter supercharger bring to the SLS AMG Black Series.

There aren't any official numbers available so far, but the following video shows an SLS AMG Black Series by Weistec with at least 750 hp at the wheel going around Laguna Seca.

Keep in mind that this is not a hot lap – it's more like a mildly warm one - and that the engine is only a couple times rising over 4-5000 rpm, when the Grizzly sounds would probably transform into the roar of a lion who just sat on one of its nuts. Enjoy! 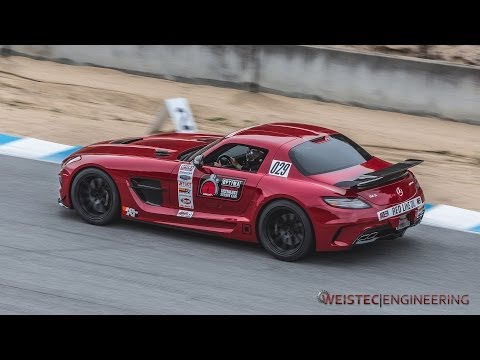