2 BMW M3 Gets Tuning Box, Hits the Highway to Check for Improvement

4 BMW S65: The M3’s First and Only V8, and Five-Time International Engine of the Year Winner

The most popular M3 generation and the most outrageous engine ever fitted into a production BMW never officially crossed paths. However, thanks to the folks at Brintech Customs, these two M icons came together, and the result is one jaw-dropping machine.

Meant to homologate the first 3 Series for the Deutsche Tourenwagen Meisterschaft (DTM) and Group A Touring rules, the first M3 hit the streets in 1986. A terrific machine that exceeded BMW’s most optimistic expectations on both road and track, it paved the way for the carmaker’s most celebrated model line, which currently consists of six distinct generations. While the E30 is the rarest, most collectible of them all, the third generation based on the E46 3 Series is considered by most enthusiasts the best M3 ever built. Of course, that’s debatable, but with more than 85,000 units sold worldwide, it's unquestionably the most popular member of the M3 lineage.

Two years before this brilliant generation was discontinued, BMW M introduced a new version of the bigger M5 and what it hid under the hood blew people’s minds. At the time, the Bavarians were also involved in Formula 1 as an engine supplier for Williams, and they decided to showcase their race engine expertise on a road car by developing an F1-inspired V10 from scratch. Unlike previous powerplants, which were all based on existing motors, the naturally aspirated 5.0-liter dubbed S85 was not just BMW’s first ten-cylinder, but also the first production engine designed from the ground up by the M division.

A lightweight, all-aluminum masterpiece, it featured ten electronically actuated individual throttle bodies, quasi-dry sump lubrication, magnesium-steel conrods, oil-cooled, cast-aluminum pistons, and BMW’s VANOS (variable valve timing) system on both the intake and exhaust cams. All these goodies enabled a maximum output of 500 hp at 7,750 rpm and 384 lb-ft (520 Nm) of torque at 6,100 rpm. It redlined at 8,250 rpm and delivered one of the most exhilarating exhaust notes ever heard from a production car.

Naturally, some M3 enthusiasts prayed that BMW M would release a limited edition E46 powered by this insane engine, but that never happened, and they would have to settle for the first (and currently only) V8, a unit based on the S85’s architecture which debuted in the E90/E92/E93 M3.

In the years that followed, some E46 M3 owners never gave up on the dream of owning a V10-powered ride and one of them decided to turn this dream into reality. Located in Australia, this owner took his stock Phoenix Yellow M3 to Brintech Customs in New South Wales for the ambitious swap. Although the task seemed insane, the custom car experts with a soft spot for Bimmers welcomed the challenge and got to work.

After sourcing an S85 in great shape – which was not an easy task, by any means – they started the process of transplanting it into the M3’s engine bay. Surprisingly, the big motor managed to fit, so a complete redesign of the front end wasn’t required, but the team still had to fabricate custom mounts, reinforce the subframe, modify the sump, and relocate some of the ancillaries. Even more surprising, everything was done without altering the stock steering rack, something that you rarely see with such a complex swap.

This particular car came with an SMG II sequential from the factory, but its owner wanted a six-speed manual. The gearbox had to be sourced from a North American-spec E60 M5 (the only version available with a manual from the factory), then it had to be linked with the engine and the M5’s stock limited-slip differential. This was relatively easy to do, as all the components were OEMs, however, stuffing them inside the E46 chassis took months of painstaking custom fabrication. Moreover, the engine control unit (ECU) had to be reprogrammed, which was probably the most complicated part of the build. The S85’s Siemens MS ECU is notoriously hard to tune, but thankfully, the Brintech team found someone in Germany who remapped the unit to work with the new configuration.

After the M5 drive train was successfully fitted onto the M3 chassis, the suspension system was completely upgraded to cope with the added power, but the stock brakes proved to handle all the extra ponies, so they were retained.

When it came to the bodywork, the only visible alteration was a set of vents incorporated into the hood to improve cooling. The stock front bumper also had to be revised to make room for the M5-sourced radiator, but much to the team and owner’s satisfaction, a bumper from the limited-edition E46 M3 CSL proved to be a perfect fit.

Apart from that, no other modifications were performed, and the whole swap was completed using only original BMW M parts.

Sitting on 19-inch BBS alloys also borrowed from a CSL, the V10-powered M3 was completed in 2018, after about a year of hard work. Shortly after, Brintech stated that they gathered all the required know-how to perform similar swaps much faster, so if your biggest dream is an E46 M3 with an S85 under the hood and money is the least of your problems, the talented Australian tuners can turn it into reality.

If you’re wondering how this amazing machine sounds and performs, you have to check out the outrageous YouTube video below. 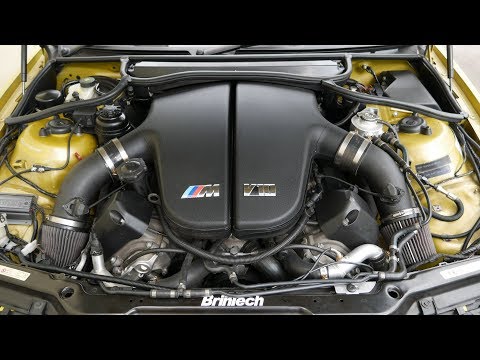