2 750 hp SLR McLaren by RENNtech Does a Slow Burnout

3 This RENNtech-Tuned S 600 W221 Does The Smokiest Burnouts

Alex Oagana
The Mercedes-Benz SLS AMG (C197) is one heck of a supercar, bringing the future and the past and pasting them together in a highly desirable collage with gull-wing doors.
1 photo
The past is represented by the overall look of the model, which harks back in many ways to the 1954 Mercedes-Benz 300 SL (W196), otherwise known as the original Gullwing and one of history's most desirable cars.

The ginormous hood and gull-winged doors aren't the only old-school features on the SLS AMG though, and are probably eclipsed by the epic M159 engine growling beneath the aluminium bodywork.

Naturally-aspirated and with a total displacement of 6.2-liters, the gargantuan beast develops either 571 hp in the “regular” SLS AMG, 591 hp in the SLS AMG GT or 631 hp in the DTM-like SLS AMG Black Series.

A bit more impressive than its horsepower or torque numbers is probably its sound, which is single-handedly responsible for our exaggerated infatuation with this legendary engine.

We aren't the only ones in love with the way it roars, but there are some people out there who think that the M159 could do a bit better in the decibel department.

Among those people are the nutters from Akrapovic and RENNtech, who filmed the following SLS AMG and captured its nightmarish exhaust sounds in order to scare as much viewers as possible.

Sounding like a combination between a robotic tiger and the god of thunder cutting himself shaving, this modern Gullwing sports an Akrapovic exhaust system with long tube headers and a RENNtech ECU upgrade.

It might be a good idea to get the children out of the room before clicking play. 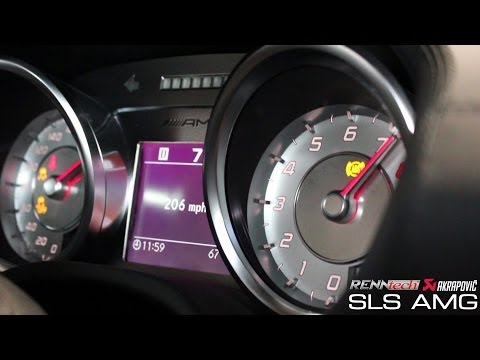