4 This Four-Wheeled Robot Laughs in the Face of Gravity, Climbs Walls

This Norwegian Composite Drone Is the New Weightlifting World Champion

Vlad Mitrache
Just to set things straight right from the off, the drone was able to lift nearly 134.5 pounds (that’s 61 kilograms), but don’t go ordering that fridge from Amazon and expect it to be delivered in half an hour just yet.
1 photo
Responsible for this new Guinness World Record is drone maker Henning Pedersen and students from the University of Oslo. They took eight separate six-rotor drones and melded them together using wood and aluminum tubes into a giant device they called the “Megakopter.” A fitting name, I would say.

If you feel it looks a little like a sea buoy, it’s because Megakopter’s makers didn’t want to complicate things and so used four fitness balls as shock absorbers for the landing. After all, the rig was supposed to hurdle back to the ground with a nominal payload of over 134 pounds, so it needed all the cushioning it could get.

The whole principle - stick as many drones together as possible and, eventually, you’ll get the necessary lift - is simple, but making it work requires more careful planning. You can look at the Megakopter as some simple form of a fractal: the drones have their rotors, but take one step back, and the drones themselves become the rotors for the entire rig.

Flying the Megakopter must have been a very difficult task (especially since it looks like it was pretty windy), unless some clever programming was done in advance to allow for automated individual control of each drone. To get an idea of how hard it had to be, imagine you have an eight-rotor drone, and you must fly it by controlling each propeller separately. This synchronization between the eight drones that make up the Megakopter was clearly the key aspect, together with keeping the overall weight down.

To count as a record, Megakopter had to lift at least three feet and three inches off the ground (one meter) and hold that altitude for longer than 30 seconds, which it did.

In case you’re wondering why Alexandru Duru’s flight isn’t holding this record too (as he and his gear must have weighed more than 134.5 pounds), it’s because having him on board of the craft makes it impossible to prove that his drone could lift the same weight without dynamic stabilization from his body movements.

The Megakopter is said to be able to lift up to 149.9 kilograms (330 pounds), so it could be that Pedersen and the students are keeping an ace up their sleeves in case somebody tries to break the record. 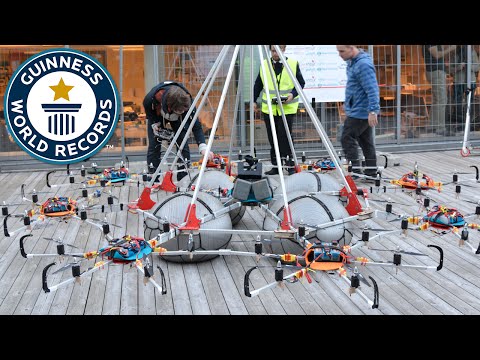