This Night Vision Driving System Can Double as a Dashcam, Parking Monitor

Lanmodo Vast has been around for a while as one super-advanced night vision system aimed at drivers, but now the parent company is getting ready to launch the new Pro model with upgraded specs and new capabilities.
6 photos

Supposed to go live on Indiegogo for crowdfunding support, the Lanmodo Vast Pro is first and foremost a dashcam with an 8-inch display that lets you see what’s happening ahead in real-time. It supports up to 128GB of storage, which is more than enough to store up to 13 hours of recordings.

Using a Sony CMOS chip (no specifics are provided), the camera promises clear videos even when captured in darkness.

And speaking of darkness, this is where the whole experience finally becomes more interesting. The Lanmodo Vast Pro also plays the role of a night vision system that helps drivers see potential objects on the road even in low-light conditions.

Obviously, looking at the screen isn’t necessarily the best thing to do when driving, and an AI-powered system with an object recognition system and alerting feature would really come in handy, but the new device promises to offer a night-view distance of up to 300 meters with a 45-degree field of view, and thus go beyond what your car’s headlights could normally see.

The camera can see clear images not only during the night, but also in bad weather, such as heavy rain, fog, and snow.

Lanmodo Vast Pro can be plugged into a typical charging port in the car or the OBD connector. It also comes with a rear-view camera that can play the role of a parking assistant, while also keeping an eye on what’s happening around the car when you’re not there.

In other words, the Pro model can now double as a parking monitor 24/7, with the data to be captured automatically when motion is detected by a G sensor.

The device will soon launch on Indiegogo, and the parent company promises a 68% discount on day one for early supporters. 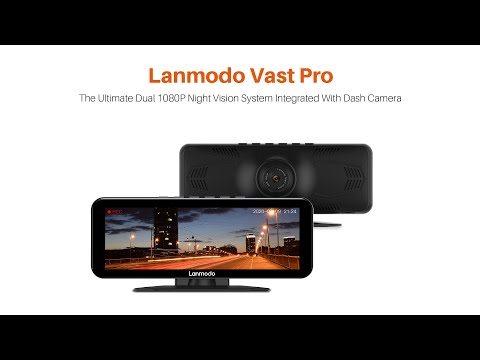