1 Fuel, Cars and Other Goods Transported Safely Thanks to Operation Sentinel’s Warships

Traditional sources of energy, such as solar power and wind power, have made a major comeback these past years, as more and more industries are moving toward sustainability. In addition to new vessels being specifically built to incorporate modern sails, some companies have developed ingenious sailing solutions that be integrated on any type of conventional ships.
7 photos

One of the current goals in the maritime industry is to accelerate the transition toward clean energy alternatives. According to Kongsberg Maritime, a power system specialist, there’s a growing demand for advanced wind propulsion in shipping.

The company has recently launched a partnership with Norsepower, the developer of the modern Rotor Sail solution, in order to offer ship owners and shipyards an effective and simple technology.

Norsepower’s Rotor Sail is described as a “push-button wind propulsion” solution, because it’s so easy to implement. The package consists of the sails (which come in various heights, depending on the type of vessel), a fully-automatic control system that adjusts the forward thrust of the sails, a control panel for the captain, and a low-voltage electrical power supply.

The main principle of the Rotor Sail is that, when the wind is strong enough, the system automatically detects that and kicks the sails into gear, allowing the engines to be throttled back.

The system is automatic, using a variable electric drive system to rotate the Rotor Sail, and doesn’t require additional efforts from the crew. This way, the ship can maintain constant speed, while also saving fuel and cutting emissions. Rotor Sail claims to be ten times more efficient than conventional sails, because it uses a smaller sail area to produce more lift.

This modern technology is based on the Flettner rotor, invented by Finnish engineer Sigurd Savonius, and then demonstrated by Anton Flettner, in an Atlantic crossing, back in 1926. Norsepower claims to have upgraded the original engineering system, so that’s it’s even more effective and easy to operate.

Earlier this month, Norsepower also won the prestigious Energy Globe Award for reducing shipping emissions. The Rotor Sail can lead to fuel savings of up to 20%, and it can be easily integrated on most types of cargo ships. 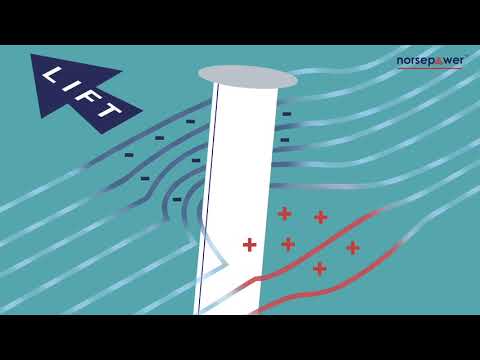