4 Tetrahedrite Can Turn Exhaust Heat Into Electricity for Hybrid Cars

5 History of Car-Wrecking Games and How “Next Car Game” Will Change It
Car video reviews:
Coverstory

This Model of Stephenson’s Rocket Stirling Engine Could Be Yours

He was called the greatest engineer of the 19th century and his work probably changed the world of railways as we now know it. The brilliant inventor is also the man who created the famous Rocket Stirling Engine, one that ended up serving as the template for most steam engines for 150 years thereafter. Among the new arrivals at the exclusive Hammacher Schlemmer online shop, a completely operational locomotive model is now available.
1 photo
Ever wondered how we ended up here, into a world of machines that technologically advance faster than we can buy them? Well, in a way it all started from the steam engines some almost 200 years ago. And great minds such as locomotive pioneer Robert Stephenson are among those people we should thank. This is why any nostalgic locomotive enthusiast will probably find this model quite the collectable.

Powered by an external combustion Stirling engine, it’s a fully operation Stephenson locomotive. Well, the mini-version, of course. Made in Germany from machine-tooled solid brass, stainless steel, and aluminum, this working model uses the thermodynamic principle of a regenerative heat engine- put to its first practical use in 1818 by Robert Stirling. It’s powered by the expansion and compression of air.

“An alcohol burner in the rear heats a cylinder; a quick flip of its brass flywheel sets the engine’s displacement and working pistons into motion. The resulting expansion and contraction of heated and cooled air inside the pistons operates twin connecting rods which drive its two 3"-diameter rubber-bound front wheels,” the product it’s described by its manufacturer.

It works with ethyl alcohol and a full burner allows 15 minutes of operation. For 800 bucks you’ll also get 12 pieces of G-gauge track that forms a circle. Weighing 2 lbs. (900 g.), the mini-locomotive will also roll on tables and countertops without track. 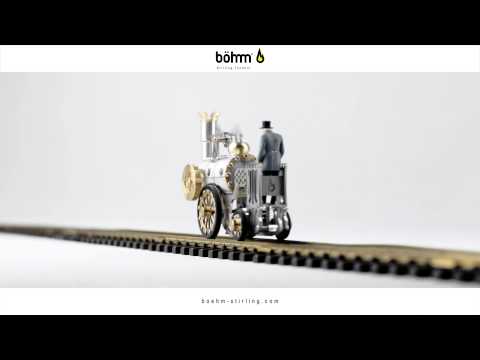