3 Meet the World's First Flying Racing Car Pilots, Set to Be the First of Many

Tesla States It Made $3.3 Billion in Profits in Q1 2022, Analysts Are Skeptical

This Might Be the Best Drone Footage You Have Ever Seen, It's Also Action-Packed

You are all aware of drones by now, and some of you know about FPV drones, which are flown in an entirely different manner from the conventional ones. Well, the latter can generate spectacular footage, and this is especially true if you have something to film and are not just flying a drone around.
7 photos

The folks over at Red Bull know how to put on a show, and their footage is world-class from all the events they organize and participate in. At least, footage with Red Bull athletes, as the company describes them.

For this action-packed video, Red Bull decided to try to get the best possible footage on an FPV drone, so they hired Thomas and Shaggy, the Dutch Drone Gods, as they call themselves, and asked Thomas Slavik, a champion rider, to film his run in Valparaiso, Chile.

The site is home to the Red Bull Valparaiso Cerro Abajo race, which had its first edition in 2003. It involves racing bicycles downhill on stairs, and it does not lack things like big drops, riding the wall, going through buildings, and other dangerous activities.

After watching the video that is embedded below, we urge you to never attempt to replicate this, as serious injury or death may occur if someone tries to go biking downhill on stairs or by attempting to ride a wall.

Thomas Slavik is a master in the sport, and even he requires his full concentration and ability to perform a clean run on the route in Chile.
The idea behind this was to have a full run recorded in a single shot.

Filmmakers, vloggers, and people who work with cameras and filming call this a “one-shot” or a "one take." The idea is that you cannot make mistakes, and you must not have to re-shoot some of the footage because you did not film it correctly the first time.

Well, when filming with an FPV drone, you need excellent signal and reception for it, which is why the crew prepared a larger drone with a signal repeater, which was flown above the route as the main drone was flying behind the cyclist. Moreover, signal boosting antennae were installed, and the two drone specialists were operating them from a roof.

While we hope to see many more exciting things this year, this video will get a seat on the podium for excitement and wow factor. Go ahead and watch it below, and then re-watch it on a large screen TV for full effect. 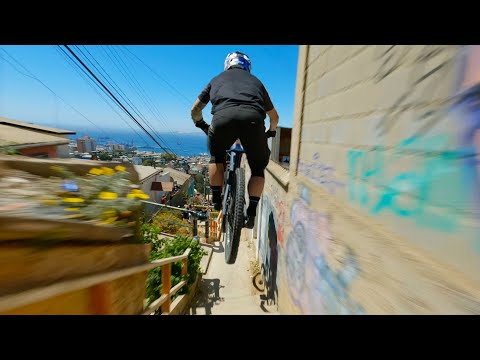