2 Honda Civic Has a Horsesh** Grille, Looks Like a Bugatti Veyron if You Close Your Eyes

This May Be the World's Most Hated Civic Project Car, and It Is Getting Rebuilt

Sebastian Toma
The internet is a strange place from some points of view, and it has a strange memory. If you add this to the fact that trends come and go, people may discover something that might have been somewhat cool many years ago, and they make fun of it. From there, it can start snowballing, and then it may become a meme or a negative example of something.
6 photos

The fifth generation of the Honda Civic, launched in 1991 for the 1992 model year, was a tuner favorite. It is still popular today in some circles, despite being 30 years old, as there is still aftermarket support for it, and all the problems that could have appeared already have a known solution. The latter part is why the internet is such a great tool, and not something negative.

Many years ago, a teenager named Mike Benke decided to modify his Honda Civic with a homebrew wide body kit. The latter was not unanimously appreciated on the internet, as it is outlandish in its design. The most interesting part of this vehicle is the fact that the wide body kit is made out of metal.

Usually, when people decide to do such a build, they go for fiberglass, and those who can afford it choose a solution that involves carbon fiber. The old-school way of doing things, and some might say the only way, is to use metal. Evidently, it might weigh a bit more than fiberglass, but it does require more work, to say the least.

The fabrication work on the vehicle must have been incredible, and it is admirable in a way. The problem is that just because you work hard on a project, it does not mean that it is great, or that people will appreciate it for the work you put into it. Instead, people are looking at the end result.

If the end result is not up to expectations, social norms, or promises, the amount of work put into something is irrelevant to everyone except the person who did it. Many years after this vehicle was completed, it was sold, repainted, and then believed to have been lost.

Well, Freddy Hernandez, who goes by his internet nickname of Tavarish, managed to buy it a couple of years ago, and he now gets to share its repair process with us. Hopefully, he will manage to get this rust bucket into something resembling a vehicle.

As you can tell, instead of asking if he should, Freddy went ahead and asked why not? 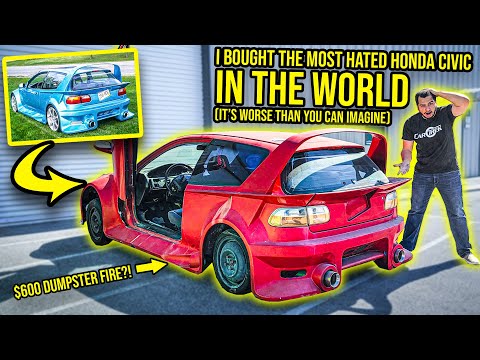