3 1987 Buick GNX: The Muscle Car That Could Hold Its Own Against a Ferrari Testarossa

4 Buick Regal Looks Like a Sleeper, Pulls Brutal Launch at the Drag Strip

This Low-Mileage GNX Has a Rare Option on It, Worth Looking at It

With less than 14k miles on the clock, this Buick Grand National is ready to trade hands, and even though it's in great condition, it's not completely original, but the changes shouldn't affect your decision.
1 photo
When talking about the muscle-car era, most of us think about the GTOs, the Camaros, the Mustangs, and the Challengers. But Buick was also part of that game and with good results. Yet, its GS Stage 1 came too late to the party. Come 1987, and the carmaker had its revenge with the GNX. So perhaps it was the least-expected contender on the market to produce something more special than the rest of the Regal range.

The car you see here is one of the 547 vehicles produced in that one and only production year for this unique Regal. The three letters come from Grand National Experimental. It was made in partnership with the British engineering squad from McLaren Performance Technologies/ASC. While most people bought the GNX to drive them and push them to the limits, this car was not.

It still sports the original paint on it. However, it went through a polish treatment by its Bulletmotorsportsinc seller from Fort Lauderdale, Florida. Sure, some parts of the car are not completely original, such as the bumpers, but they match the car's appearance. The black grille and the angular shapes earned the GNX the nickname "Darth Vader's car" since it appeared in the same year as Star Wars.

Inside, the black and gray upholstery look perfect, and the unique logos embroidered on the headrests are part of the GNX heritage. Even the door cards and the floor mats look spotless, like if the car left the assembly lines just a few days ago. Yet, that tape-stereo on the dashboard is more or less just decoration, especially since its power antenna doesn't work. Moreover, this GNX has a rare option named U52, which is the digital dashboard.

Under the hood, the car has its all-original, untouched, turbocharged 3.8-liter V6. Buick rated the powerplant at 276 horses, although the actual figures were closer to 300 hp. It is mated to the same four-speed automatic gearbox that sends the power to the rear end, which sports a limited-slip differential. Judging by the way this car looks, most probably will just swap a garage floor to another, even though Buick made it to be a daily driver. It also has a refreshed underbody rust protection treatment. Last but not least, the car shows less than 13,704 miles (22,054 km) on the odometer, and they are all original. But hurry, this example will go away on March 14th, on Bring a Trailer website. 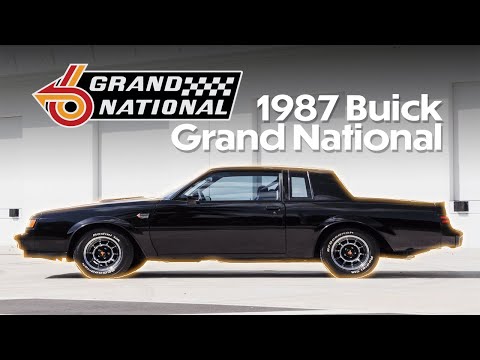