3 Construction on Toyota Woven, the City of Tomorrow, Officially Begins

4 The Mountain Tiny Home Is Minuscule, Has Glass Roof and Skylight Shower

If you know anything about the UK, you know that the phrase “scorching hot” isn’t that often associated with anything that happens here. Yet in London, back in 2013, there was a building that could melt cars, fry eggs, start fires, and cause sunburn.

File this under “fascinating car-related trivia:” the building is officially called 20 Fenchurch Street, after the name of the street it’s built on. It’s situated in the heart of London’s financial district, on the edge of a conservation area, and it’s perhaps one of the most controversial buildings to have been erected in the capital in recent years. Least of all for the fact that it once caused considerable damage to a parked Jaguar.

The unofficial name of the construction is Walkie-Talkie, but it also goes by Walkie-Scorchie and Fryscraper, among others. Designed by Rafael Viñoly, it resembles a walkie-talkie (or a maxi-pad, if you’re feeling extremely ungenerous toward the designer from Uruguay), with a concave face that makes it appear as if it’s looming over the surrounding neighborhood in the most threatening manner. Considering the “death ray” it’s able to project on the street below, the impression of the threatening stance becomes a bit more real.

In 2013, Fryscraper became an overnight celebrity. Londoners and tourists alike were crowding in a particular area south of the building, conducting experiments and feeling on their own skin the intensity of the “death ray.” Martin Lindsay’s story helped the frenzy peak: in under two hours, his Jaguar XJ, parked in the right (wrong?) spot at the right time, started to melt under the glare of the reflected sun.

Lindsay told the BBC at the time that the wing mirror, the panels, and the Jaguar badge melted and became deformed, estimating damage at about €1,000 ($1,176 at today’s exchange rate). He wasn’t as much mad about the damage to his car as he was amazed that the architect, contractors, and developers would erect a 37-story building worth €200 million ($235 million) and not consider the possibility that something like this could happen.

The same question was on everyone’s mind. The journalist who fried an egg in a pan on a window sill. The hairstylist whose products on the shelves started to bubble. The owner of the next-door business whose rug started to smoke and tiles became cracking from the heat. The girls who came to work on their tans and got sunburns.

“You can't believe something like this would happen,” Lindsay said. “It could be dangerous. Imagine if the sun reflected on the wrong part of the body.”

Indeed, a recent study by Imperial College fire expert Guillermo Rein, published in the Journal of Building Performance Simulation and cited by Londonist, revealed that this could have had fatal consequences had it not been for London’s characteristic clouded sky. Had Viñoly built his building in any other city in any other part of the world, people could have been killed by his “death ray.”

Not that Viñoly is a stranger to buildings with a bite. His Vdara in Las Vegas had the same problem, also caused by a concave glass facade: the ray concentrated on an area near the pool, singing newspapers, melting plastic loungers, and causing burns on client’s skins. He eventually solved it by putting up umbrellas and plants.

The Walkie-Talkie was developed by Land Securities and Canary Wharf, and their initial reaction was to blame the “current elevation of the sun in the sky.” Their best defense at the time was that the situation would only last some three weeks, for up to two hours a day. Viñoly’s explanation was even more bewildering: he knew this would a problem, but he didn’t “realize it will be so hot,” so blame climate change because London used never to have sunny days.

In the years that have passed, the Fryscraper has been rendered harmless, first by setting up a scaffolding structure to absorb the concentrated ray, then by making alterations to the building. The horizontal louvered windows that were initially part of the design and that would have prevented this from happening were lost in the cost-cutting process. But it will always remain the glass building that melted a car. In dreary, rainy, cloudy London. 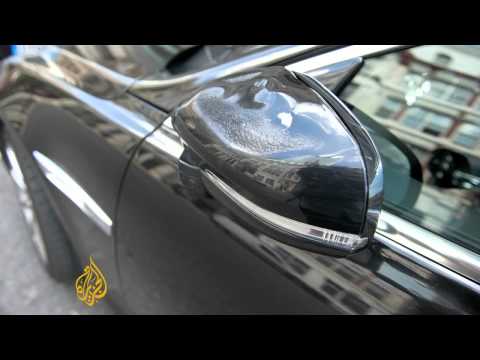 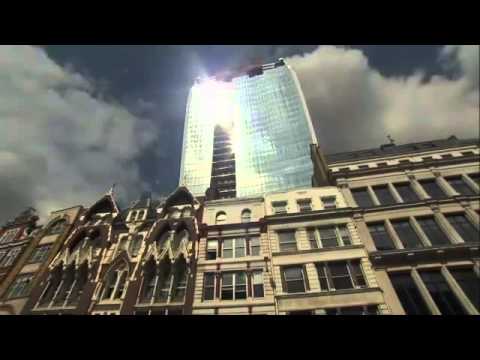