Even if you hadn't read the title of this story or the one of the video, some questions about the type of powerplant that the following Nissan Silva S14 drift car is using were bound to appear.
1 photo
The hint is the type of burbling exhaust sounds that can be heard, making some people even think that they were dubbed over the video.

As it happens, this dilapidated Nissan is no longer sporting a puny four-cylinder engine as the original car, but a mighty supercharged 5.4-liter V8 powerhouse that was hand made by an AMG engineer a few years ago.

Sporting no less than 500 hp and 700 Nm (516 lb ft) of torque, the sound of the engine has lost some of its original eardrum-shattering roar after being shoehorned in this jalopy Silvia S14, but it most definitely sounds a bit better than the four-pot that the car was sporting from the factory.

Another fun fact is that in this application, the M113 ML55 engine is paired with a manual transmission instead of an automatic for the first time in its life, which kind of makes this project drift car even more special.

Sure, the flimsy front apron and way that the front wheels seem to be attached to the car make it look like it is about to fall apart at every corner taken using opposite lock, but other than that it looks like it can really hold its own over a drift course.

The man behind the wheel is Romanian Calin Ciortan, who is actually one of the best drifters in the King of Europe drifting series. With that being said, we sincerely hope that the AMG engine came from a crashed car and is now living its second life. 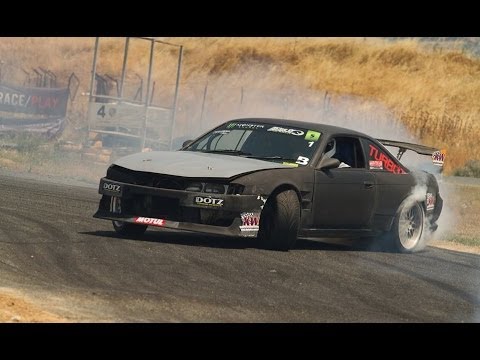