1 Toyota GR Yaris Gets a Lexus Makeover, What Should They Call It?

Marty and Moog acquired a Toyota GR Yaris not that long ago, and it did not take too much for them to start modifying it. Instead of dragging the project on for many episodes, as well as multiple months, this GR Yaris will get whatever can be done to it in just 48 hours. Once the time has elapsed, it will be put on a trailer and sent away to a new adventure.
8 photos

The Japanese hot hatch has good support from the aftermarket world, and the two friends will install several components to see their effect on the performance of this GR Yaris. Unlike previous projects, this one will focus on bolt-on improvements first, which will help any GR Yaris owner have an idea of what to expect when tuning their cars.

The two enthusiasts have done their research, and they have made a list of modifications that will help improve the GR Yaris on the track while not "completely ruining it for daily driving." That sounds like every enthusiast's dream at the beginning of a project car, but some of us know where that gets you.

Just like any vehicle with a turbocharged engine, the modifications that are required to make it run just right on the track without risking damage involve keeping its engine, its oil, and its brakes at their optimal temperatures. Going too high or too low might ruin the oil or might leave you without brakes.

Moreover, since this is a turbocharged car, the intercooler will lose efficiency as it soaks heat from the motor. Getting an upgraded unit will help improve that, as will an oil cooler do for the oil temperature while on the track.

Toyota offered a set of brake cooling ducts for the GR Yaris, but this example did not come with them, so this is the time to get them installed since the front bumper has been removed. Fortunately, minimal work is required to get hose brake ducts to fit.

Other modifications include installing upgraded suspension parts, new wheels, fresh performance tires, and more. Watch the entire video below, and you will be sure to learn something about the GR Yaris or at least about the modifications that should be made to a vehicle before taking it to the track. Here is what can be done to a VW Up! in 24 hours. 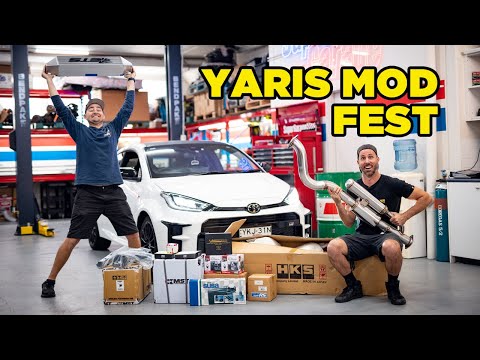