3 Get Ready for the All-Electric Long-Haul Truck

This Is the World’s First EV Fire Truck

Andrei Nedelea
The Menlo Park Fire Department showed off an all-electric fire engine it would like to start using as of 2021. The fully electric vehicle is quite different compared to traditional fire trucks, but its makers say it does many things better.
4 photos

The truck itself is built by Rosenbauer, in Austria, and it’s essentially the all-electric version of the company’s CFT concept (short for Concept Fire Truck). Rosenbauer is among the world’s three largest manufacturers of fire service vehicles, with a history dating back to 1866, and it supplies vehicles in over 100 countries spanning three continents.

Rosenbauer says that aside from its lack of tailpipe emissions, the CFT is also more compact and maneuverable than an average fire truck. It’s also safer for crews to operate its various systems, since climbing into the cab is no longer required - everything can be done from ground level.

According to the manufacturer, the cost for a fully-equipped CFT is around $1.2 million, slightly more than a traditional truck. But since its running and maintenance costs would be lower, some of that difference would be made up for over time (especially if it’s charged at night when electricity rates are lower).

Another benefit of this concept is its high modularity - its role and functions can be easily changed and adapted. For instance, the rear part of the vehicle can be fitted out as a mini-ambulance, in order to offer medical assistance at the scene, before an actual ambulance has arrived.

The CFT was initially revealed in 2016 and it’s been paraded around Germany and Austria where different fire crews got to experience it and provide feedback. The truck is also fully compliant with U.S. regulations, so homologating it for Stateside use won’t be an issue, according Rosenbauer; it also said that in order to reserve one, interested fire departments must make a $200,000 deposit. 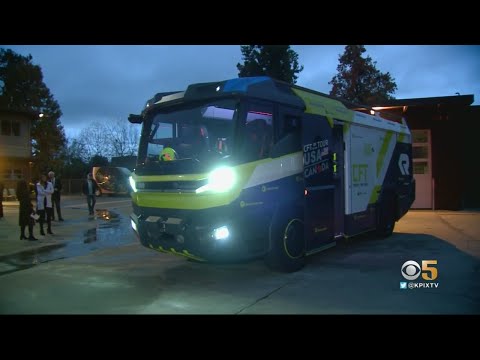