3 SLS Rocket Has Fire Running Through Its Veins, Animation Shows

Daniel Patrascu
Back in the 1960s and 1970s, at the height of the space race between America and the then Soviet Union, there was little engineers of the two nations weren’t willing to try to get ahead. Having just placed humans on the Moon, Americans had of course an edge, and planned on fully exploiting it.
10 photos

In the early 1970s, after the first Moon landing and in full swing of the Apollo program, the American space agency was trying its hand at designing a reusable spacecraft that could be capable of taking humans into orbit and back again.

NASA’s efforts would materialize in the 1980s in what was to become the mighty space shuttle, one of the workhorses of space exploration efforts for decades. But before that, several ideas were tried out, including the wacky Saturn-Suttle design you can see in action in the simulated video attached below.

In essence, the concept was trying to tap on the success of the Saturn V rocket that helped place humans on the Moon by slapping an orbiting spacecraft to the rocket’s first stage and sending it on its merry way.

For the task at hand, the rocket would get wings and a landing gear of sorts that would have allowed it to come back and land on the pad, not unlike the SpaceX machines are doing today. Engineers would only have had to replace the five engines of the rocket, refuel it, and the thing would have been ready to go once more.

For one reason or another, this flyback booster Saturn-Shuttle design didn’t come to be, and NASA opted to use a solid rocket booster for the space shuttle instead. That means we have little idea of how the thing would have looked and worked once in the air.

Well, now we do, courtesy of an animation published by space animation specialist Hazegrayart. You can enjoy the full four minutes of a spaceship that never was below. 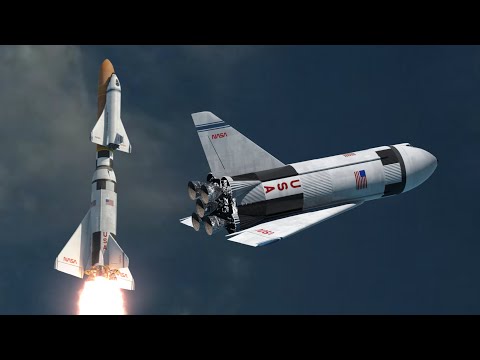