2 How Rivian Dethroned Industry Leaders Ford, Chevy, and Dodge, at Their Own Game

5 Rivian R1T Beats EPA Range, But Is the Least Efficient EV Edmunds Ever Tested
Car video reviews:
Up Next

This Is How the Rivian R1T Handles Ike Gauntlet, the World's Toughest Towing Test

Towing is one of the most basic tasks a pickup truck is needed for, but also one of the toughest. We already know the Rivian R1T is a capable truck, but is it good enough to get through the World's Toughest Towing Test? The guys at the Fast Lane Truck put the R1T through its paces on their famous Ike Gauntlet.
9 photos

Once the fog from the last year’s earnings call dispersed, Rivian entered a new phase, as they need to ramp up production and take care of their many customers on the waiting list. But with more and more vehicles on the road, we also found out new things about the R1T pickup truck and its R1S SUV brother. Among them, we now know the R1T is a capable truck, able to take on a cross-country trip while towing a trailer. It also helps with day-to-day chores at a ranch, if needed, although it was not meant for these tasks.

The all-electric truck from Rivian boasts a towing capability of up to 11,000 lbs (4,990 kg), which is impressive in itself. Less impressive is the fact its range gets cut in half when towing, as a previous report showed. Range aside, the R1T finished the trip and saved the day. But that pushed the guys at the Fast Lane Truck to take the matter to the next level, so they decided to torture the R1T on their famous Ike Gauntlet, also known as the World's Toughest Towing Test.

Ike Gauntlet takes place on an 8-mile stretch of I-70 interstate from Dillon, Colorado, that goes up to over 11,158 feet above sea level at the Eisenhower/Johnson tunnels at the Continental Divide. The test involves towing a trailer that is close to the truck’s maximum towing capability down on that stretch and then up again. In the case of the R1T, the trailer had another truck on it for a total of 8,100 lbs (3,674 kg). The test was a lot harder to complete, considering the cold weather at the time.

Going downhill for the first part of the test was easy, although the road had a 7% incline. Despite the regenerative breaking engaged most of the time, only 2% of SOC was gained. At this point, the truck needed a 30-minute break for a fast charge at an Electrify America charging station. This showed Rivian truck plays nicely with the station, being able to peak at 152 kW.

During the second part of the test, the truck/trailer combo was accelerated hard uphill which resulted in a 2% SOC being lost for every mile climbed. A bit too much, but this is an extreme situation. Regular towing should result in the more favorable 1% SOC per mile. On the bright side, the R1T proved stable, comfortable, and quiet, while also being surprisingly quick on the job. 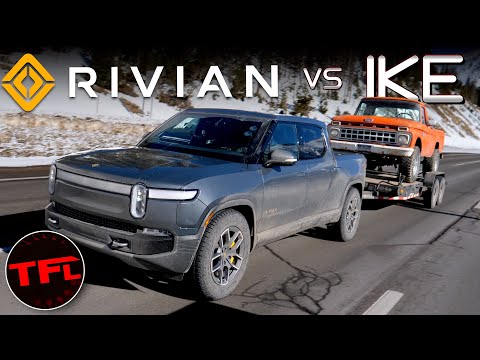