5 NASA Needs Your Help With the New Electric Astrovan
Car video reviews:
Up Next

One of the most important moments in the history of space exploration is right around the corner. On August 29, the Space Launch System rocket is expected to put the Orion spacecraft on a route to the Moon, effectively kicking into motion our species’ second, and most ambitious space exploration program.

This Is How Boeing and Airstream Make Space Exploration Boring

The Artemis program, like some others before it, has some dedicated tech being created for it, and that includes a tool too familiar for space exploration enthusiasts, the Astrovan. That would be the vehicle meant to carry astronauts to the launch pad.

The term came to be in the 1980s and was first used for an Airstream Excella motorhome converted to suit astronauts’ needs. Before it, a Clark-Cortez motorhome was used to transfer the astronauts of the Apollo program to their Saturns. History also recorded an Itasca Suncruiser RV being used for the same purpose in the years of the space shuttle.

As some of you might know, Artemis will have its own Astrovan once crewed flights are cleared by NASA’s higher-ups. At the time of writing, the thing is still on the drawing board, so not much about it is known (all that is public can be found here).

Yet since the Apollo and space shuttle programs, the space exploration industry has changed greatly, mostly on account of private companies stepping into the spotlight. As such, at the moment a variety of vehicles are used to transport both official and tourist astronauts to their rockets.

When SpaceX rockets take off with people on board, for instance, Tesla Model X are used, because, you know, Elon Musk owns both. Blue Origin, on the other hand, uses Rivian trucks for the same thing, because, you know, Jeff Bezos has an interest in both. And, finally, Virgin Galactic has a very strong relationship with Land Rover.

But there’s another private company that will soon fly its own spaceship, now that the test flight to the International Space Station (ISS) successfully (more or less) came and went: Boeing.

The company’s Starliner will soon join SpaceX’s Crew Dragon in taking astronauts up to the ISS. Because SpaceX and Tesla are competition, and the other too competitors too small to matter at the moment, Boeing will not use any of the vehicles mentioned above. Instead, together with Airstream, it’s created something called Astrovan II.

The thing is in essence a modified Airstream Atlas Touring Coach, which in turn is based on the Mercedes-Benz Sprinter. A perfect line of coaches, if you are a civilian touring the country, but not necessarily the most spectacular choice for someone that’s about to leave planet Earth.

Airstream did not remove the usual hardware to install something fancier, and that means we still get the Mercedes-Benz 3.0-liter V6 under the hood, good for 188 hp, and the 7-speed automatic to get it going.

On the outside, the Astrovan is as unspectacular as they get for the purpose at hand, with pretty much the same body that covers usual Atlases, only liveried in such a way as to clearly state its purpose, with writing spelling out CST-100 Starliner Crew Transport, an image of the spacecraft itself, the logos of Airstream and Boeing, and swapped Mercedes badges.

It's inside where some Airstream magic can be witnessed. In the back, we get six seats for astronauts, arranged across a central aisle four on one side and two on the other, each seats offered with 110V outlets and USB charging. A system that allows livestreaming from inside the van, supplied by AT&T, is also on deck, and that’s about it, really.

The build of the Astrovan II was completed in 2019, given how at the time Boeing was planning to fly the Starliner with people on board the following year. The starship failed a couple of tests though, and it wasn’t until earlier in 2022 that it got to fly again, still uncrewed, so the boring-by-comparison-with-other-astronaut-rides Astrovan II never got to be used.

Maybe the projected liftoff of Artemis I will inspire the people over at Boeing and we’ll finally get to see the Starliner take people up, but not before the Astrovan gets them to the pad. 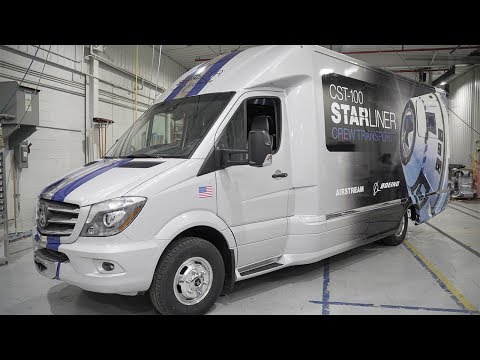