1 Wow, Owen Wilson Just Lost the Wheels on His Tesla to Thieves

2 81-Year-Old Gets Carjacked While Feeding Homeless, Does Not Lose Hope in Humanity

5 Attempted Carjacking Stops When the Victim Gets Inspired, There's Video of It
Car video reviews:
Up Next

This Is How Any Wheel Lock Can Be Broken Into, Which One Would You Buy Anyway?

Wheel locks exist for decades, and the only reason they are required is to prevent or deter theft. Over the years, the market has seen a fair assortment of wheel locks, from those offered by manufacturers as an option, to those that were developed by specialized companies.
6 photos

The problem with wheel locks, as with any theft deterrent, is that each product brings a certain level of complexity to the life of the owner, and it is up to the manufacturing company to discover a compromise between ease of use and protection. At the end of the day, you do not want to wake up and see your car without wheels.

A wheel lock that even the owner cannot remove is worthless, and the same can be said about some units that have plastic keys. The owner of the latter may get one or two uses out of them, but then the plastic cogs lose their grip, and you are stuck with a wheel that you cannot remove without the help of a workshop.

On the other hand, some companies have developed wheel locks that come out of their way to protect your vehicle against theft, but they also cost a pretty penny. While many of us would be willing to pay $15 for wheel locks, would you go as far as to pay $450? If so, how does a set of those hold up?

Well, the folks over at Donut Media have gone out and bought multiple types of wheel locks, priced from $15 to $450, and they put them to the test. The idea is that a good unit will stand its ground against one or several tools, which should be a sufficient deterrent against anyone who is not prepared to crack one of these units open.

Yes, you read that correctly, just like in the case of motorcycle locks, and even motorcycle chains, even the strongest units out there just provide minutes of coverage against an electric angle grinder. If the thieves spot the deterrent before starting to "work" on your car, they may give up and move on, but it does not always work that way. 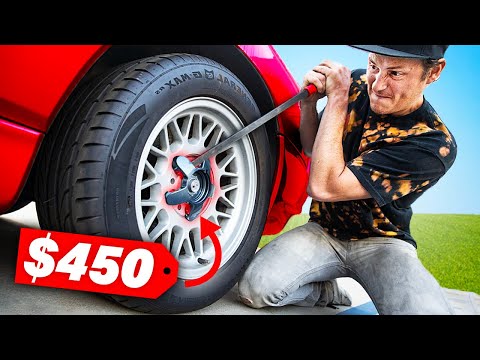