2 Mercedes EQS Will Have Access to Largest U.S. Charging Network (Over 60K Stalls)

The race is on, as car manufacturers around the globe are pushing to make the controversial switch to electric-powered vehicles. And Mercedes-Benz is planning on becoming carbon-neutral by 2039, so they're stepping up their game with the new Mercedes EQS, which they're calling "the first electric vehicle in the luxury class."
10 photos

We often hear the phrase: "The future is now". And if you've ever doubted that, you just have to look around. The progress car manufacturers are making with electric vehicles is astonishing. One of the main concerns right now is the range of these vehicles and the problems associated with the charging network. But as technology advances, those issues will be left in the past.

Nico Rosberg has been a strong advocate for electrification since he departed from Formula 1. He's just bought a Rimac Nevera and he started an exclusively electric-powered racing team, among other things. And now, Mercedes EQ has invited him to drive their newest creation: the EQS. The location of the test drive is quite fitting if you think of it. He's in Monaco, one of the most supercar-rich cities in the world.

As he's introducing the car, he's excited about the innovations that Mercedes EQ has brought forth. Because the new EQS is the world's most aerodynamic production car, with a drag coefficient of just 0.20. By comparison, the Porsche Taycan Turbo sits at 0.22, while a Tesla Model S is not far behind with 0.208. And with that in mind, it's easier for the EQS to move along, as it uses less energy to do so.

While Nico points out that this car can drive for 435 miles (700 km) before it needs recharging, official Mercedes-EQ figures point to a total of 484 miles (780 km). So we're getting close to what we could achieve with cars running on internal combustion engines. But if you think of the fact that the EQS has a maximum power output of up to 385 kW (516 horsepower), the technological advancements become obvious.

We even get to see the rear-wheel steering system on the car, as it does a U-turn on a tight section of the road. Nico also praises it for how quiet the cabin is, even when driving at higher speeds. And that's one of the nicest things about electric cars. The whole driving experience is less tiresome, with less noise and vibrations.

The bird's eye view camera is more advanced than anything I've ever seen before. And it looks like the navigation system is also very well built, with charging points integrated along the routes. Nico being Nico, he couldn't have driven the car without seeing what it can do. And so, we get a small sample of its acceleration potential. Nico takes it from 0 to 62 mph (100 kph) in just over 4 seconds.

Considering that there's a more powerful version coming up, it will be interesting to see how that stacks up against the Porsche Taycan Turbo S. And that's why competition is so great. Because with every new electric vehicle launch, each manufacturer will strive to outperform its rivals. Hopefully, these cars will also become more affordable, and with any luck, in 20 or so years from now, you'll be able to breathe fresh air in most downtown areas of major cities around the globe. 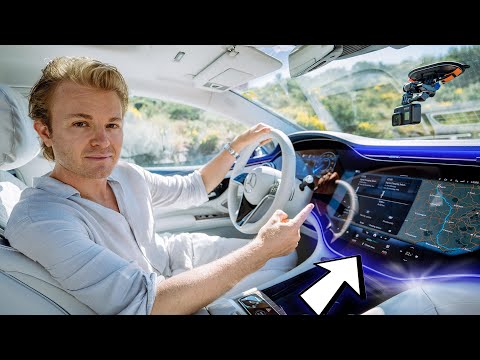