1 It Takes Work to Make a 993 Carrera S Look This Clean, but It Is Worth It

4 Inside Off Script, Jamie Foxx’s Gigantic, Custom Studio on Wheels

5 Sylvester Stallone’s Beverly Hills Mansion Is Fit for a King, Yours for $85 Million
Up Next

Will This 1952 Polikarpov PO-2 Do Any Better Under Capitalism?

While Denzel's career would involve four more nominations for Academy Awards for Best Actor, which means a tie of seven nominations with Dustin Hoffman, Marlon Brando, and Jack Lemmon. Denzel won the coveted Oscar for Best Actor back in 2001 for his masterfully played role of Detective Sergeant Alonzo Harris in Training Day.

Well, just like his 1979 Chevy Monte Carlo in Training Day, Denzel's Porsche 911 Turbo is black, and it is also special. This is because the 993 generation of the 911 was the last to come with an air-cooled engine, and he has the Turbo model, which is the first-ever to be offered in this configuration, along with the all-wheel drive.

The 993 Turbo came with an all-wheel-drive system inspired by the one found in the 959, and it had a wider bodywork than the Carrera of that generation, as well as various other improvements. Starting with the 1997 model year, as should be the case with this vehicle, came with “turbo” written on its wheel's center caps, while the 1996 model year had the Porsche crest as the other models in the range. If you take a close look at the wheels, you will notice that their center caps come with the Porsche crest, but this can be easily removed and replaced.

While the mileage of the vehicle that was originally purchased by Denzel Washington is not specified, the folks at I AM Detailing have revealed that he is the only owner of the vehicle. As you can observe, Denzel has taken good care of his 911 Turbo, although the vehicle is not a garage queen.

In the video embedded below, you can watch the Academy Award winner's car as it gets cleaned with dry ice, receives a fresh layer of paint protection film, a coat of wax, and paint correction. The result is a vehicle that will turn heads no matter who is driving it, but if Denzel is behind the wheel, you might not know where to look first. 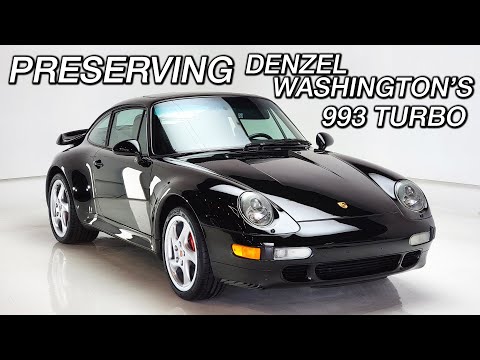