3 Watch Rivian R1T Drag Ford F-150 Lightning in a Tug of War, Has One Secret Working for It

4 Ford F-150 Lightning Selling at Auction Is About to Start a War, Is Ford Losing It?

Whenever a new electric vehicle comes into the market, people are curious to see if it’s reliable and how it stands the test of time. With Ford F-150 Lightning starting deliveries at the end of April, is now time to look into its records and see how it held up after 10,000 miles of heavy abuse.
8 photos

The assessment comes from The Fast Lane Truck guys, who bought their own F-150 Lightning to play with. They weren’t light on the truck either, so the Lightning got its fair share of abuse during the 10,000 miles (16,100 km) of ownership. Since the electric F-150 is built pretty much the same as the ICE version, we expect to offer similar reliability while sustaining the same workload. This is in contradiction with what petrolheads think about electric vehicles.

Thanks to their intensive editorial adventures, the TFL team has put many miles on this Ford F-150 Lightning in a very short time. This makes it one of the very few that have reached the 10,000-mile mark, considering the first customers only got their toys at the end of April. The video published on the TFLEV channel gives us a pretty good insight into what the Lightning can do and what it can’t. Ultimately, everyone wants to know whether it was built to last, like its ICE brethren.

To give you an idea of the kind of abuse the truck has seen, the TFL team just returned from a trip to Alaska. They also put the pickup truck to a series of towing and howling tests, racing, and other abuses. A fair share of this video is about the general presentation of the Lightning and the modifications the team operated to make it more habitable during their adventures.

For instance, we learned that the pop-up roof tent drops the usable range by around 70 miles (113 km), with 250 miles (402 km) of range left when driven at moderate speeds. An interesting takeaway from the video is the need for all sorts of adapters to allow the truck to charge at different charging stations. Basically, the whole frunk is full of cables and adapters.

Although the Lightning appears to be holding up well after the 10,000 miles, its weak point seems to be the seat upholstery. More specifically, the driver’s seat shows signs of wear, with the material pulling away from the foam padding. Maybe this is something Ford should address because otherwise, many owners will be disappointed.

Another complaint is the lack of a visible state of charge in the instrument panel. This only shows the available range, but you need to dig into the central screen menus for the battery state of charge. The Ford F-150 Lightning also offers very little information regarding energy use when driving. These are all addressable via software updates, so we’re not considering them faults but rather mishaps. 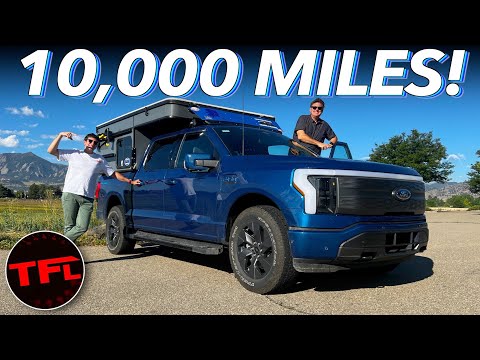