4 Airstream Heritage Center – A Century Worth of Luxury Travel-Trailers

5 Abandoned 1982 Winnebago Camper Comes Back From the Dead, Rocks Big-Block V8
Car video reviews:
Up Next

From 1932 to 1955, Westcraft was a name that could be seen on highways, usually being pulled behind era vehicles. Yes, Westcraft built travel trailers, and some of them have made it through the years, only to be restored to their once-forgotten glory.

Folks, I ran across Flyte Camp a few months ago, and since then, I've been exploring the fantastic restoration works that this team has achieved through the years. One such restoration that has sold for a price tag of $120K (€112K at current exchange rates) is this Westcraft Coronado from 1950. Yes, that's 72 years and counting since it first saw the light of day, and after some craftsmanship from Flyte Camp, this puppy looks just as good, if not better, than the day it was born.

To get a clear idea of the magic a lucky owner is now in possession of, we also need to examine who Flyte Camp is. This company was started back in 2010 by Justin and Anna Scribner. But, the major perk here is that Justin's family has a camper trailer history dating back to the 1940s, as Justin's father grew up living out of travel trailers. Later on, Justin and Ana acquired their own 1958 Shasta Airflyte destined for restoration, and everything just snowballed from there, eventually giving rise to Flye Camp.

All that brings us back to the 1950 Coronado, a vintage travel trailer that has been restored in such a way that Flyte Camp calls it "Always Instagram Worthy." However, the best way to get a feel for what Flyte Camp has achieved is to invite you on a quick trip through our imagination. Yes, for the next few minutes, you will be living out of the Coronado.

The one feature that will grab your attention first is the exterior. Just look at it! A rounded front construction sets the tone for the remainder of the trailer and yields some aerodynamic properties. On the other hand, the exterior has been completed by a crew other than Flyte Camp, and the result is a beautiful two-tone build with windows tattering almost all of the camper's upper half. Some aluminum detailing has been left exposed and beautifully highlights the rest of the trailer.

As for the interior, this is where Flyte Camp's expertise was applied. As you first enter the Coronado, one of your first impressions may be that of a lot of wood. This is common among vintage campers as few to no companies were using fiberglass or other composites for furnishings. For the Coronado, Flyte used a mix of Douglas Fir and birch, just as you'd find in the original trailers. The floorplan, too, has been respected rigorously, except for the inclusion of a toilet room.

Once inside, at the front of the mobile home sits a living room, equipped with countless storage options, warm lighting, and a leather couch, perfect for hanging out during a hot day. As you travel towards the rear of the home, you'll first pass a kitchen and toilet room to finally arrive at the bedroom. Because more than 70 years have passed since this RV first hit the streets, all the appliances had to be restored as the elements had their way with them.

As you journey through this mobile home, notice how everything feels vintage and old. Frankly, that's exactly that sort of goal Flyte Camp seems to have aimed for, and the result is one that sold for $120K. If that's not enough, this particular unit even won the title "Best in Show" at the first Trailer Rally held at Hot August Nights.

Personally, I've never been a huge fan of travel trailers built with this much wood. Still, considering the way one of these can look after 70 years of sitting around, I may just have to investigate getting something vintage and old, so I can make a quick buck flipping a restored travel trailer. Just something to consider if you need a summer project; get an old trailer and fix it up. 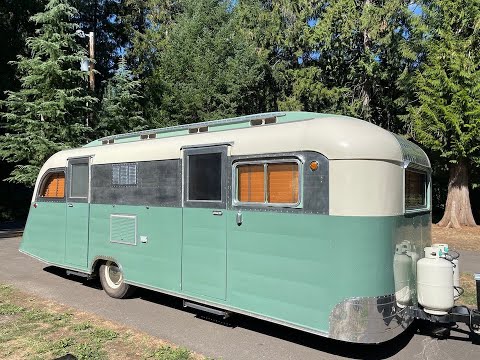