1 The Plectrum Hyperyacht Digitally Flies Over Water at High Speeds

4 Lazzarini’s Pearlsuite Is a Luxury, Floating Resort That Can Navigate Across the Water

5 Lazzarini Sovrano Megayacht Concept Is a Floating City, Has Two Helipads and a Car Garage
Coverstory

This Hyperyacht Flies Over the Water at 75 Knots, Eyes 2025 Launch

Elena Gorgan
Even the wildest dreams can become true if there’s enough drive, motivation and financial backing for them. Pierpaolo Lazzarini of Lazzarini Design hopes this will be the case for The Plectrum, the studio’s most recent hyperyacht concept.
19 photos

Teased on social media earlier this month, The Plectrum is now getting the official reveal treatment, with a full video, more renders, and a list of features that will be further expanded on, if there’s interest in the project. It lives up to the hyperyacht description attached to it upon its introduction, with the promise of the ability to fly over water at impressive speeds, total luxury, and a design that’s bound to stand out even among the world’s most impressive megayachts.

Lazzarini Design boasts a portfolio that defines outrageous and outstanding, whether said designs are for superyachts, floating islands or hypercars. A handful of Lazzarini designs have made their way from the concept stage to real products, while a few more recent ones are headed directly to the Metaverse. Lazzarini hopes The Plectrum will fall in the former category.

Say what you will about the state of the world right now, but one thing will never change: rich people will continue to do rich-people things regardless of what’s happening to everyone else. Suffice it for one of these rich people to come along with an estimated budget of €80 million (approximately $87.2 at the current exchange rate), and The Plectrum could transition from computer renders to a physical boat.

The Plectrum is the biggest vessel that Lazzarini has equipped with a hydrofoil system so far, and it’s designed to be the fastest of its class. Inspired by America’s latest cup sailboats like the Prada Luna Rossa design, and honoring the revolutionary 1965 USS Plainview, The Plectrum is meant to showcase that the technology for such an impressive vessel exists. It is now showcased in a 74-meter (242-foot) superyacht with an adjustable hydrofoil system, depending on cruising needs.

At anchor, the width of the hydrofoil system would be of 15 meters (49.2 feet), and it would expand to 20 meters (65.6 feet) when sailing at full speed. This adjustable system would help create “a different superyacht configuration which will allow much faster sea traveling than conventional similar size ships,” according to the design studio.

Unlike the aforementioned Luna Rossa sailboat, The Plectrum wouldn’t rely on wind power to go full throttle and “fly over water,” as Lazzarini puts it. Instead, it would make use of three hydrogen-powered motors of 5,000 hp each, so there would be a total of 15,000 hp of power, a very lightweight construction, and an ultra-efficient hydrofoil system to take this superyacht to a top speed of 75 knots (86.3 mph / 139 kph).

Indeed, The Plectrum is all carbon fiber under that lovely shade of burned orange, which that Lazzarini seems to favor for many of their larger boats. This would keep the weight of the vessel down with no compromise on durability, but it also drives up the final price estimate. The hydrofoil system adds to that estimated tally, which would be enough to acquire a much larger superyacht but without said ability to “fly” over water.

Accommodation onboard would be for 14 guests, including the owner in their master suite. The Plectrum has four decks in total, with all guest suites grouped on the main deck: six suites with ensuite bathrooms, and the much larger and luxurious master suite. Lazzarini does not detail the number of crew or crew accommodation in this stage of the project.

Since no hyperyacht can call itself that based on performance alone, luxury features would be on par with what you get on any one of today’s megayachts. There’s a helipad with a hidden garage at the bow, and a lift that brings the aircraft up on deck when it’s time to switch travel modes. The side garage is a pass-through one, thus creating a gaping hole in the middle of the ship when both sides are open, and it’s spacious enough to hold two large tenders. They’d match the mothership in styling and paintjob, as would the aircraft.

The main deck holds the pool and a large lounging area, and spills onto the beach club below, with a fold-out swim platform. Also on the main deck is another garage, designed for water toys and a car. Why go down the rental route when you get where you’re going, when you could be hauling your own car on your hyperyacht, right?

When traveling at full speed, elevated above the waterline by the hydrofoils, everything onboard The Plectrum would be hidden from view on safety and aerodynamics considerations, including the pool. Thus closed off, The Plectrum resembles a bullet in shape.

Like the majority of Lazzarini designs, there are currently no plans to bring The Plectrum into production. That said, the design studio notes that, should the right, interested party come along, the hyperyacht could launch in 2025. 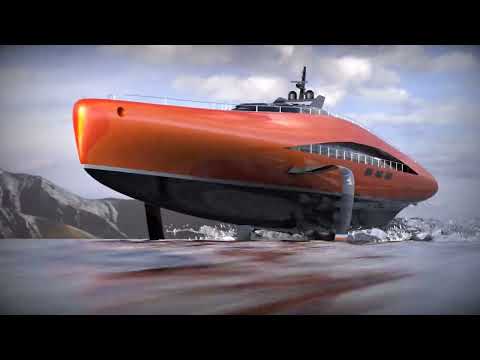