This Hoverbike Takes Us Closer To Future Personal Aircraft

While BMW’s flying R 1200 GS Adventure concept has to wait until a new technology enables it to float, these guys just created a functional hoverbike that might soon get into production.

Everybody knows what a drone is nowadays. The word pretty much changed its meaning as we don’t really use “drone” to describe a small, crew-less stealth reconnaissance military aircraft, but that small quadcopter kids and adults alike are flying today as a form of sport.

Hoversurf Inc. is one of the companies that saw these drones' potential. If you scale up your regular flying toy, you end up with a plausible people carrier aircraft. And that’s how the Scorpion-3 platform got developed.

As you can see in the video here, the Scorpion is a working single-seat aircraft that is based on the quadcopter design. However, unlike a traditional one, this here uses an overlapping solution for the propellers to keep a slim profile.

“For the moment, the Scorpion platform is increasingly seen as an extreme sports instrument, yet the vessel’s transportation potential remains evident,” the company explained.

Hoversurf claims it has dedicated a lot of resources and efforts to research and development to achieve the size and shape of the Scorpion hoverbike. Its design was inspired by heavy-duty sport-utility motorcycle frames, and the whole concept was adapted to flying while still offering speed and maneuverability.

The Scorpion platform is said to be designed for extreme conditions and is fitted with an in-house custom software to allow full manual or automated control so anyone could fly one.

With those exposed overlapping rotors buzzing around the pilot, you might say it would be a madness to swing a leg over such a machine. However, keep in mind that this is a functional concept, and the potential commercial version will be fitted with protection devices.

The only inconvenient keeping this to get into production is the fact it runs on batteries. To give yourself an idea of the autonomy of such a machine with current technology, a tiny racing quadcopter used in FPV competitions nowadays can stay in the air for about 5 minutes using a Lithium-polymer battery that’s the size of its frame. 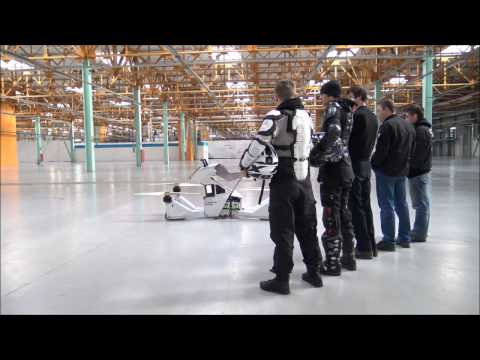