2 ForTwo City Car Doesn't Seem That Smart, May the Downforce Be With It

5 Gone-in-600-Bucks Eleanor smart fortwo Is Both Ridiculous and Cute at the Same Time
Car video reviews:
Up Next

The Last Aston Martin V12 Vantage Roadster Is Here, You Can't Get One

This Guy Just Converted His smart fortwo Into the World's Smallest Camper, Literally

Home > News > U-turn
Mircea Mazuru
While browsing YouTube I stumbled upon the ridiculous video we'll discuss today. A guy named Max is turning his smart fortwo, of all things, into a camper van.
8 photos

Max works for Silverline Tools, a company with a 30-year history in manufacturing and supplying hand and power tools to merchants and traders throughout the UK and mainland Europe. I browsed their channel and saw they mainly do videos about tools or DIY projects of all kinds; they also did an ambulance camper conversion.

The next project Max wanted to take on was a special one – he decided to turn his personal smart into a camper van. He says that “my little smart is the greatest car in the world.” He justifies it with the following reasons: it has fully interchangeable panels, it does 60 miles to the gallon (4.7 l/100 km); you can park it sideways in a parking spot (I bet we’ve all wanted or needed this at some point), and he’s also in love with its styling. You can read the excitement of building his dream whip on the man’s face.

He starts by taking the ride apart, breaking some small bits along the way, even though he’s as careful and gentle as one can be. While working on the conversion, Max tells a funny story that happened when he was younger, he pulled up in a parking lot to another smart car driver, and they both decided to swap all the plastic panels. If you didn’t know, all smart fortwo panels can be easily removed and swapped. As he says, “I drove in red and came out silver.”

Back to the build - the first step is taking the wheels off, fitting the lift kit, and adding a few 50 mm spacers so he can install off-road tires. After adding an adapter (the smart only has three bolt holes) and extra wheel arches fixed using roofing bolts, he’s good to go.

The next step is welding an external roll cage and putting it on the roof so that he can have a base for the tent. A nice touch is a front winch that apparently Max always wanted to have on one of his cars. Some extra details are the spotlights just above the hood and plastic steps.

The final bit is adding the roof tent, a gas stove, and sink, filling up the smart’s tiny trunk. And there it is, the world’s smallest camper van! Honestly, it looks really cool; too bad Max doesn’t take it off-road in this video so we can genuinely rate its performance. Maybe in the next one! Anyway, it proves that any ridiculous idea can become a reality if you dedicate enough passion and man-hours. Congrats, Max, on the Smart camper; we wish you happy exploring! 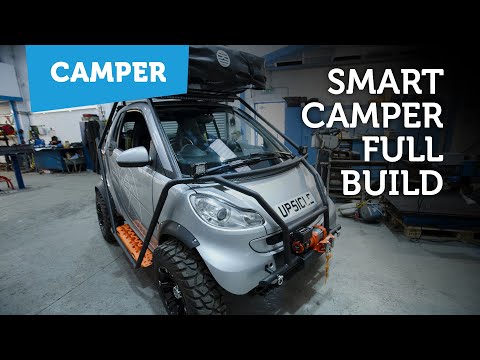