2 What Makes the NASCAR Next Generation Cup Car So Divisive?

3 1970 Plymouth Superbird Has Only 9K Miles on the Odo, Looks Brand-New

4 This Hemi-Powered Wrecked Race Car Is the Cheapest Plymouth Superbird in the U.S.

Home > News > Free-Roaming Wheels
Stephen Rivers
Sam Hard of Hard Up Garage is a guy whose automotive taste is quite straightforward. He loves NASCAR. It's why he painted his own car to look like a Dodge Daytona and why he was so excited to get the only Lightning McQueen car to still exist.
6 photos

Sams' love of NASCAR isn't like the casual fan, though. What's missing from the story of painting his car to look like a NASCAR is that the vehicle in question was a 1976 Cadillac. And it had a camper top on it. And this all happened when his wife was pregnant with their first kid. That's the kind of love he has for NASCAR.

With that in mind, it shouldn't be all that shocking then that he loved the movie Cars. NASCAR is clearly an inspiration for the film, and as Hard mentions in the video below, there's something in it for every generation.

That love and adoration for both the racing series and the film made walking up on a barnfind 1-to-1 scale model of Lightning McQueen hard to put into words for Sam. He describes it as the most famous NASCAR in the world.

It's the only one in existence, he thinks, because all the other vehicles made for the film had to be destroyed. This one was apparently saved because the company responsible for crushing it faked the evidence that the job was done.

In any case, it took him five years, he says, of regularly spending time with the owner to finally get a deal for the vehicle done. He took thousands of pounds to the meeting and it ended up only costing him 500 pounds, or around $750 bucks.

Despite plans to rebuild it himself, another buyer popped up and made him an offer he couldn't refuse. He sold the car for at least $10,000 and is planning to have a fiberglass mold of the vehicle made so that he can still have his Lightning McQueen daily driver. 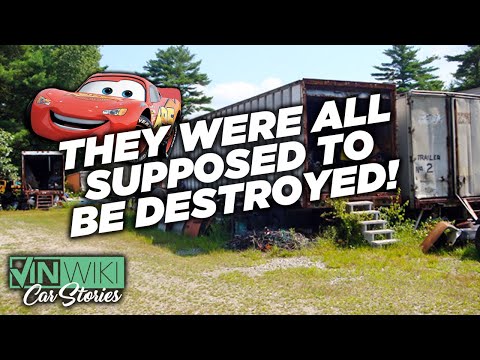