3 The Carsten Mehring Streetflyer Looks Like a Torture Device

4 The Volkswagen Streetmate - Coming Soon to Change the Mobility Game

5 The Fliz Is a Concept That Has Been Looking to Revolutionize Urban Mobility
Car video reviews:
Space Junk

From the start you can see that she’s missing an integral part of bicycle design, the front fork. Poof! None. How’s this even possible? I don't know, but it does, so let’s find out.

This is the type of contraption that I would never imagine seeing on the streets. Rather it could be right at home in an Alice in Wonderland scene. Just look at it. If you can figure out how it works without looking at the gallery, I dub thee an engineer.

That’s what I think Finish designer Olli Erkkila really is anyway. But he says he isn’t. Listen, none of this matters. What matters here is that this bicycle exists and works, against anything your brain might be telling you. And it works by breaking away from any conventional mechanisms or classic designs of bikes.

If you sit and look at the frame long enough, you’ll notice a known bicycle form coming to light, the chopper. After you check out some of Olli’s other designs you’ll quickly agree. He seems to have a history with the chopper body style, and even boasts putting together a chopper frame in eight hours.

I’d like to say that this article is not about Olli, but this time it kinda is. It was his experience with the mechanics of chopper-style bikes that led to this spark of ingenuity over a warm whatever they drink in Finland. I think Finlandia Vodka, or something like that.

Even though you figure out that the Cruiser is designed after chopper dynamics, you’ll still have a hard time figuring out how to ride this thing. Check out the gallery if you’re unsure.

By the looks of it, the bicycle is a classic single-speed. No gear-shift, no electric motors or battery packs. Heck, I can’t even see any brake-lines on this cruiser. Only your legs to do the braking, like on the bikes we used to ride when we were kids.

Now the way it works is quite fascinating. Since no fork exists to house the front tire, which is crucial for steering, a whole new way of moving the tire had to be developed. It seems that what Olli did was drop the classic top-tank bulge of the chopper to the floor and mounted the front tire on that. OK, so we have the tire in place, but it can’t be steered? Not yet.

That initial bar that holds the wheel in place actual acts more like a support for a mechanical system that allows steering. In order to steer the Cruiser, another bar runs along the tire mount, which reacts when turning the handlebars to steer the wheel in the direction you want.

If you look closely at the rear of the bike, underneath the seat you’ll see a steering system that starts at the handle-bars, connects and runs down the vertical shaft underneath the seat, then connects to the previously mentioned steering bar. What Olli did to make this design work, may not be the most visually pleasing work, but it lays the foundation for a whole way to steer you bicycle.

Think about it, with the frame lowered like this, quite a lot of available space exists that could easily be transformed into something useful. Maybe a storage area.

But as the saying goes, if it looks dumb and works, then it isn’t dumb, and the cruiser does work. Interestingly smooth, really. I’d cruise around town on a Sunday with this just to see all the ‘What the’ faces. 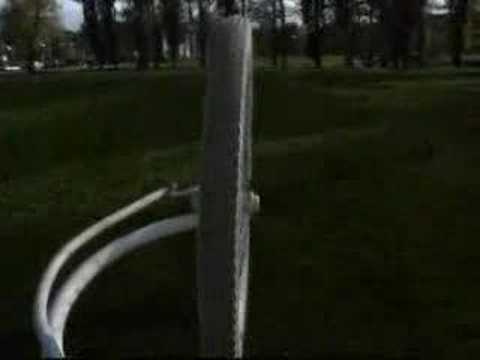