3 Galpin Rocket Mustang Teased, Will Be Unveiled at the Los Angeles Auto Show

This Ford Econoline Van Clip Will Give You the Goosebumps

In case you’re a gearhead that hasn’t heard of Gearhead Flicks up until now, do visit their webpage and subscribe to their Youtube channel because you’re in for some of the best automotive clips you’ll see around, starting with this one down bellow.
1 photo
Usually, there’s hardly something cool about a rusty 1964 Ford Econoline if you’re not into ratrodding and such. It’s a big box on wheels with some dubious headlamp surroundings.

However, the guys from Gearhead Flicks managed to turn it into a big box on wheels with dubious headlamp surroundings and a lot of style recently, with the help of Adrenaline Offroad & Customs.

In fact, that’s the video company’s new van, with the official logo and everything, which started it’s story as a rusty old Craigslist entry. It got purchased for about $1,500 and at first, the guys covered it in matte black primer and fitted it some whitewall tires.

Still, it was looking a bit odd, so they took it to the tuning company, where it received a full body restoration, a gloss black paintjob, some nice graphics, shiny rims and a new interior with a massive sound system and a big flat screen TV, which ultimately turned it from a rust bucket to an awesome retro cruiser.

Of course, being a company that does video editing for a living, the guys shot a clip with the car from its initial to final condition. It’s got the right soundtrack and everything and you can find it bellow for your enjoyment. 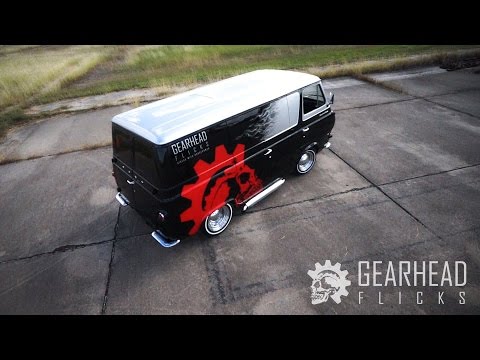